Anika Washburn and Mitchell Arch were recognized for their performances 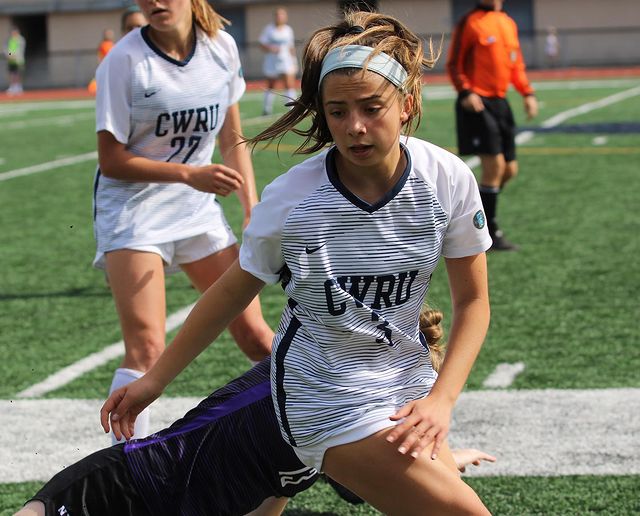 The woman's soccer team finished their season in record-breaking fashion while the wrestling and women's basketball teams began their new seasons, with things looking optimistic for both.

In their final regular season game, the women’s soccer team had the opportunity to not only potentially receive a bid to the NCAA Division III Championships, but also to make history and join the Case Western Reserve University record books.

The Spartans rose to the challenge and did just that last Sunday against conference rivals Carnegie Mellon University.

CWRU scored just one goal, but it proved to be just enough to finish off CMU. In the 13th minute, fourth-year forward Christina Hickson sent a perfectly placed pass to the six-yard box. Fourth-year midfielder Anika Washburn was on the receiving end and slid in the shot to put the Spartans up 1-0.

The goal was Washburn’s 29th of her career, bringing her within one of the program record of 30 set by Sandra Oh (1993-96). Washburn also broke her own record for points in a season with 34. She currently is three points behind Oh’s record for career points, which stands at 74. Her instrumental performances earned her the UAA Offensive Athlete of the Week honors and the Spartan Club Athlete of the Week honors.

Hickson, meanwhile, notched her fourth assist of the season and moved to 22 points for the year (eighth best in program history) and 55 career points (sixth best in program history). Second-year goalie Maggie Storti maintained her lockdown defensive play, forcing her second-straight shutout and her ninth of the year after making three saves (0.48 goals-against average for the season). Storti holds the second-most shutouts in a year and is one behind Anna Kennedy’s program record set in 2011. Moreover, her 14-1-2 record set the new program record for wins in a season by a CWRU goalkeeper.

As a team, the Spartans set a new program record for wins in a single season with their 14-1-2 overall record. The 4-1-2 conference record matched the program record for most UAA wins and marked the best UAA record in the team’s history. The victory against CMU also cemented CWRU’s second place position in the UAA standings, matching the program’s best finish in the conference (previously accomplished in 1991).

Head Coach Jen Simonetti credits the results on the field to the hard work the athletes have done in practice to build on their skills as individuals and as a cohesive team.

“We jokingly call it the lasagna,” said Simonetti in an interview with the CWRU Athletic Department, “because over the season, we’ve layered in different tactical bits, and until we connect with one we don’t move on to the next one … I was really proud of our players for just going out and playing our game … If we talk about the lasagna, it was all the pieces coming together from the defensive transition to the build up to the finish … just holding on to the win.”

On Monday, the soccer team officially received a bid to the 2021 NCAA DIII championships, the third in program history and the second under Coach Simonetti. CWRU will be hosting the first two rounds of the tournament on Friday, Nov. 12 and Saturday, Nov. 13 on DiSanto Field.

The Spartans will open their postseason against Chatham College on Friday at 1:30 p.m., who received their bid after winning the Presidents’ Athletic Conference. The winner of this match will play the winner between Ohio Northern University and Hope College.

“When we found out that we were going to have the opportunity to [host the tournament], everyone was obviously very excited,” said fourth-year defender Elizabeth White. “It’s just another step along the way towards our goals of our long tournament run. This week heading into practice, our focus is going to continue to be on executing the layers that we’ve built up all season … and being prepared for whatever situation the game might bring us this weekend.”

With 11 returning and six incoming athletes, the CWRU wrestling team is poised to take on a new season. In his first season as head coach, Josh Malave is hoping to build up the team and head into the NCAA Central Regional Championships by the end of the season.

“The team and I are so excited for the start of competition,” Malave relayed. “Most of our team hasn’t wrestled in a college match yet [and for some upperclassmen,] this will be their first time back on the mat since February of 2020 … Their preparation and focus in the classroom and in practice has made this transition smooth. I am looking to build upon the great foundation of this program and enhance [it] in areas where we have identified improvement.”

These goals are not out of reach. Third-year Mitchell Arch took 23 victories in his first-year and placed 8th in the 157-pound class at the championships. Fourth-years Adam Kates and Grant Robinson also had strong showings in the 2019-2020 season, totaling 16 and 10 wins, respectively, in their corresponding weight classes.

Last Saturday, the Spartans brought in solid performances during their season opener at the Adrian Invite in Adrian, Michigan. Arch was CWRU’s top performer, landing a second-place finish in the 149-pound weight class after earning 22 points following a 4-1 record. Arch won four straight matches on his path to the championship round. He began with a pin over Adrian University’s Michael Pizzo in 4:24, then pinned Wabash College’s Jack Thursby in 1:24, won the 10-5 decision over Henry Ford University’s Elijiah Kidder in the quarterfinals and pinned Heidelberg University’s Jamen Onesky in 38 seconds in the semifinals. Arch ultimately fell to Heidelberg’s Dwight Parker in the first-place round in a 9-4 decision. For these fantastic opening day results, Arch was named Spartan Club Athlete of the Week.

Aidan Gassel, a first-year athlete, earned 11.5 points and placed eighth in the 184-pound class after going 4-1 for the day. Fourth-year Grant Robinson brought in 8.5 points and took seventh place in the 285-pound bracket.

The Spartans continue their invitational road trip in Washington, Pennsylvania on Saturday, Nov. 13, where the athletes will compete in the Washington & Jefferson Invitational. The team will round out their November schedule at the Baldwin Wallace Invite in Berea, Ohio.

On Tuesday night, the women’s basketball team began their season on home court against the 21st ranked Baldwin Wallace University. The Spartans kept the game close through three quarters but were ultimately outplayed in the fourth, and took the 72-59 loss.

The Yellow Jackets were the first ones to put points on the board, getting up 2-0 off a layup. Fourth-year guard Abbey Lawrence answered right back with a three-pointer to give the Spartans the quick one-point advantage. The two teams traded baskets for the remainder of the first half, which included three ties and nine lead changes. The Spartans led the Yellow Jackets 36-32 at the break.

The Spartans came out with a higher intensity in the third quarter and built an eight-point lead with 1:49 left before the break. Multiple missed shots and turnovers let the Yellow Jackets climb back in to end the third quarter 50-48, though.

The fourth quarter was owned by the Yellow Jackets. They allowed the Spartans to only score 9 points and held them scoreless for almost four straight minutes to begin the quarter. The Spartans couldn’t take the lid off the basket while Baldwin Wallace continued to find the bottom of the net on layups and free throws. Baldwin Wallace outscored the Spartans 24-9 en route to secure the 72-59 win.

Baldwin Wallace dominated CWRU in most of the team statistics, with the real difference makers being points off turnovers (10 for CWRU to 21), second chance points (4 to 16) and points in the paint (22 to 36).

The Spartans will look to earn their first win of the season as they hit the road against another tough opponent on Friday, Nov. 12 against John Carroll University.