Women’s soccer finishes strong at home with win over Oberlin 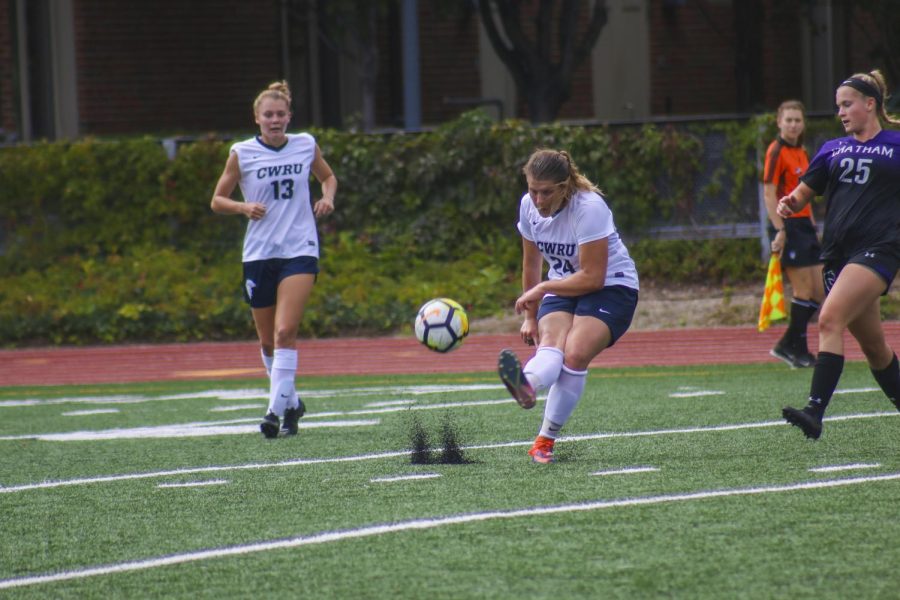 The Case Western Reserve University women’s soccer team ended the home schedule of their season on a high note, with a 3-0 win over Oberlin College on Friday, Oct. 19.

The match against Oberlin was headlined by third-year forward Kimberly Chen. She opened up the Spartans’ scoring in the 26th minute with a 29-yard free kick that snuck past the Oberlin goalkeeper. Five minutes later, Chen led first-year forward Christina Hickson on a breakaway from the defensive side of the field with a through pass. Hickson deceived the goalkeeper and had an easy goal.

The match remained at 2-0 until the final 30 seconds, when Chen’s corner kick was tapped in by second-year midfielder Lizzy Barna.

Chen finished the game with a goal and two assists. She is tied with Hickson currently for a team-leading 14 points this season.

The CWRU defense shut out Oberlin, with second-year goalkeeper Lauren Metz recording five saves and a clean sheet. She lowered her season goals-against average to 1.26 and increased her save percentage to .818.

CWRU had 10 shots with seven on goal, while Oberlin had eight shots with five on goal.

The win meant a winning home record at 5-4. This also marked an end to the team’s non-conference schedule.

The Spartans finished the week with a win, bringing their overall season record to 7-7 and a University Athletic Association record of 0-4. The team will be on the road for the rest of the season, with conference matchups against University of Rochester on Friday, Oct. 26 and Emory University on Sunday, Oct. 28.

“That is a tough one, and they are very different teams as well. Rochester is a real tough, blue-collar, hard working team that is really good in the air and is going to be a really physical game. Emory plays a prettier brand of soccer, and they are very, very good. They are really dangerous in the attack,” Head Coach Tiffany Crooks said. “It will be interesting to see where we are at. They are exciting games for us and winnable.”