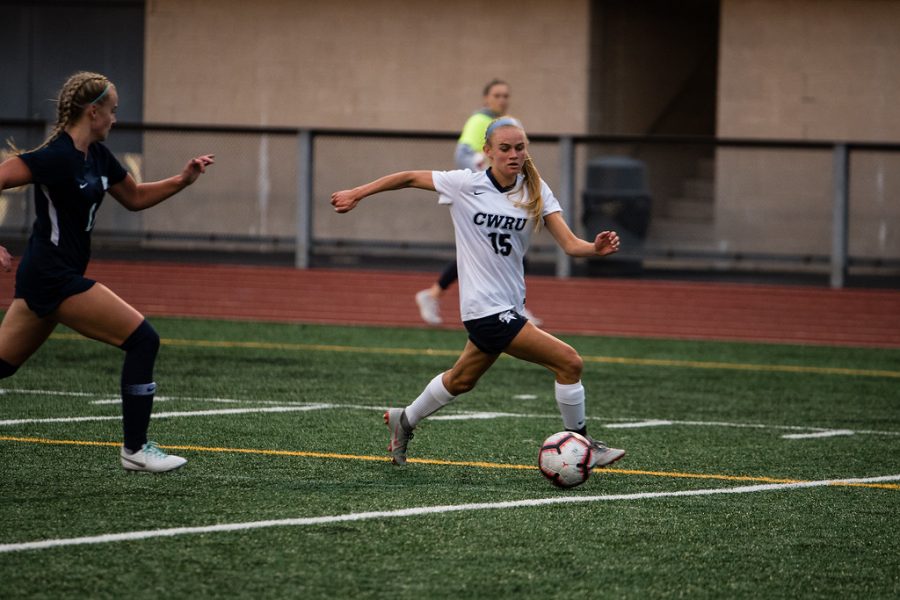 Second-year midfielder Merry Meyer joined in on the scoring avalanche against Hiram College on March 29, netting the team's second goal in the first half.

“It had been over 500 days since our players were able to compete, and so [the season] was more about enjoying the opportunities [and] to work together against an outside opponent.”

That was the mindset Head Coach Jen Simonetti instilled in the women’s soccer team coming into the incredibly short three-game season this spring.

The team answered the call with flawless performances against Hiram College, Franciscan University of Steubenville and Ohio Wesleyan University, shaping up to a 3-0 overall record this spring.

The Spartans opened the season on March 29 in an exhibition match against Hiram College at Charles A. Henry Field in Hiram, Ohio. Second-year defender Laura Gorjanc scored the first goal of the game at the 5:02 mark in the first half. The Spartan offense found its spark and continued to attack, with second-year midfielder Merry Meyer scoring two minutes later.

Before halftime, the Spartans racked up four more goals, including two from third-year midfielder Anika Washburn. Hiram was able to net a goal halfway through the first half, making the score 6-1 heading into the break.

The blistering start for the Spartans spilled into the second half, during which the Spartans scored another five goals while limiting the Terriers to only one goal. The final score was a dominant 11-2 win for the Spartans and a spectacular way to start off the season.

The women’s soccer team was back in action just two days later on March 31 when they faced off against Franciscan University in Steubenville, Ohio for their first official game of the season.

Washburn scored the first goal of the match off of an assist from second-year forward Maia Sethi 22:18 minutes into the first half. Just 41 seconds later, second-year midfielder Johanna Dunkers extended the lead to 2-0 off of an assist from third-year forward Brianna Van Zanten. Before halftime, however, Juliana Rubino of Franciscan was able to cut into the lead with a goal at the 41:36 mark, making the halftime score 2-1.

In the second half, second-year forward Aniya Hartzler pushed the lead to 3-1 off of a penalty kick at the 60:26 mark. The Barons were quick to respond with Rubino netting a goal to make the score 3-2.

The Spartans could sense that Franciscan was right on their heels. Recognizing the challenge, the Spartans exploded for two more goals. Washburn found the back of the net for a second time after receiving a pass from Van Zanten about midway through the second half. For the fifth goal, Van Zanten took the ball to the net unassisted at the 82 minute mark, making the final score 5-2.

For the season finale, the Spartans played an exhibition match against Ohio Wesleyan in Delaware, Ohio.

Following a lot of back-and-forth between the two teams, the Spartans finally made a goal at the 33:07 mark when second-year midfielder Melina Peshoff tapped the ball into the goal after third-year forward Christina Hickson kicked the ball into the right goal post. Right before halftime, Van Zanten received the ball from Dunkers and shot it into the net with 32 seconds left in the half, putting the Spartans up 2-0 going into halftime.

Less than 13 minutes into the second half, Van Zanten continued to power the offense and scored a second goal for the Spartans off of a penalty kick. Third-year forward Ella Copich capped off the Spartans’ scoring for the season by placing the ball in the lower right corner of the net at the 65:45 mark. Franciscan University was held scoreless for the entire game and the final score was 4-0.

Including the exhibition games, the women’s team finished with a perfect 3-0 record. As expected, the players were ecstatic about their team’s performances.

“I thought the season went very well despite the circumstances due to the pandemic,” first-year Storti said. “From the beginning of the spring season to now, we have grown as a team and as individuals. Finally having games was a great opportunity because we started to see where we were truly fitness-wise and team-wise and we could see where we needed to grow besides just from practice. We really got to bond as a team and work more on our tactical play since we were finally competing, and I think we started to set ourselves up very well going into the fall.”

Even though the season was shortened, the team still cherished the ability to get some real games in this year.  “The entire team was super excited to compete again after missing out on our spring and fall season this past year,” second-year Peshoff stated. “The coaching staff did a phenomenal job of giving us as much of a season as possible. We came into the season ready to work hard and win, and that’s exactly what we did.”

Third-year Van Zanten emphasized the dedication and diligence of the players on the team especially through safety protocols, saying that the “team has been working exceedingly hard for the past nine months and to finally have the opportunity to prove our unnoticed blood, sweat and tears means everything. To have an undefeated season is one thing, but to do it in a mask the whole time is incredible.”

Scoring three goals in three games this season and maintaining strong defensive play, Van Zanten has impressed her coaches and teammates alike, and believes she can continue improving her craft.

“I actually surprised myself. After having two seasons off, I didn’t expect I would pop off this season at all. I believe I brought a new spark of aggressive, tenacious energy to the field this season. Of course, I owe most of my stats to my teammates’ beautiful balls and plays. Looking ahead to my last season, I definitely need to work on stamina in order to keep the intensity of the game high for the full 90 minutes,” Van Zanten said.

Goalkeeper Storti, meanwhile, has had an interesting experience playing her first collegiate soccer season amidst the chaos of the pandemic. Though Storti is accustomed to playing at a high level as a part of the Elite Clubs National League in high school, college is still “a whole new level. In the [University Athletic Association conference], we’re literally playing against the best of the best in Division III and it’s a different mentality … My adjustment, [otherwise], has been pretty good and I can’t wait to see how it changes in the fall.”

Moving into the last few weeks of the semester, Coach Simonetti wants the team to focus on fundamentals while also “connecting more within the team, building team culture and improving our fitness to provide a better foundation for the [several months] we spend apart this summer.”

Although the spring season for the women’s soccer team has come to an end, the future looks extremely bright.

“This team has so much potential, as we saw my freshman year [of 2019 when we made] it to the NCAA tournament for the second time in program history,” Peshoff remarked. “Our team is very ‘soccer-smart’ and it’s exciting to see such a high-level of soccer play out on the field. I’m looking forward to seeing what the team accomplishes in these next few seasons.”

Coach Simonetti is taking a pragmatic approach to the future and believes that although there is a lot to be excited about, the team is going to continue working on its skills and improving overall.

“I won’t even fathom a guess as to what the future holds. College soccer across the country has been different for every program and every conference. We are just working on what we can improve upon and how we can grow as a team. There are so many factors that can and will affect next fall, and we just want to control what we can control, [such as] fitness, attitude, work ethic, commitment, culture and hope that it is enough to achieve our goals in the fall.”

For the time being, the Spartans should celebrate all they have accomplished in the past year and continue to believe in their abilities going forward.

“I’m so proud of the women’s soccer team and all of CWRU’s athletic varsity teams for overcoming so much adversity this past year,” added Peshoff. “I’m thankful to be a part of a community that has been so supportive of each other through hardship. It’s been really fun to watch all the teams get back to their respective sports. Go Spartans.”