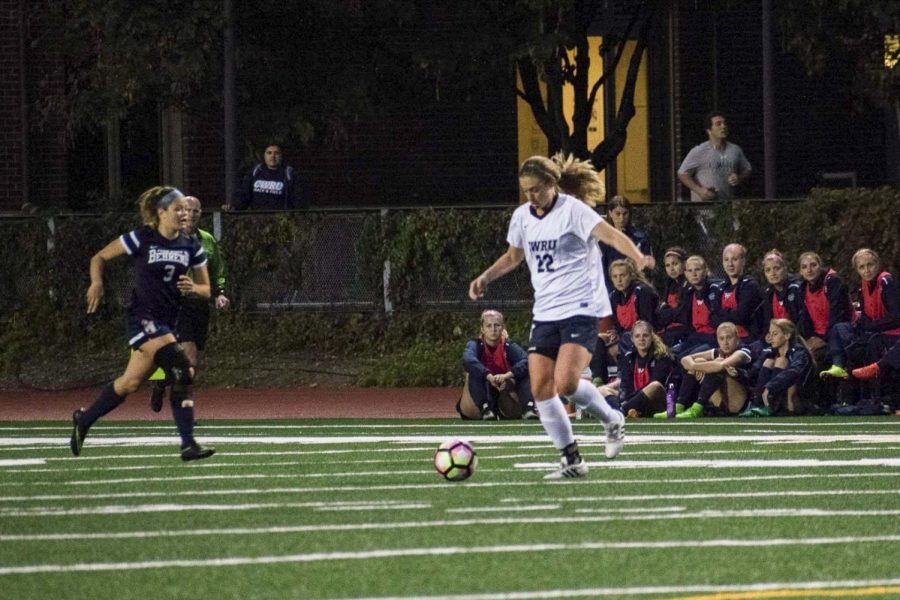 The women’s soccer team took on the No. 1 and No. 2 teams in the country, losing both conferece matches.

The Spartans had their work cut out for them when they faced the country’s top two women’s soccer teams beginning in weekend of Oct. 13.

In their first match, the team held its own, but the Case Western Reserve University women’s soccer team saw a twist of fate as they lost with 11 seconds left in regulation at No. 2 Washington University in St. Louis on Friday, Oct. 13. The team fell to No. 1 University of Chicago a day later, 3-0.

Both teams played defense throughout the game. Even with the 11 to one disadvantage on shots in the first half, the defense, lead by second-year goalie Lauren Unterborn, held tight and stopped the Bears’ scoring attack. Unterborn recorded five saves in the first half and nine overall for the game.

The Washington offense pummeled the CWRU defense in the second half, but regardless of the attack, the Bears were unable to score. The Spartan offense was limited but had an excellent opportunity to score in 52 minutes in when second-year forward Kimberly Chen launched a header saved by Bears first-year goalie Emma Greenfield.

Washington kept the match from heading into overtime. Bears third-year midfielder Jessica Kovach crossed the ball to second-year forward Taylor Cohen, who chipped a shot in past Unterborn to score the game-deciding goal in 90 minutes into the game. The Spartans fell 1-0.

The team then traveled to No. 1 University of Chicago on Sunday, Oct. 15, trying to forget about the loss to Washington. However, the Maroons offense met them immediately, through a goal in the seventh minute by fourth-year midfielder Mia Calamari. The score remained 1-0 the rest of the first have due to Unterborn and the CWRU defense.

The second half began off-balance for CWRU; the Maroons scored a goal in the 46 minutes in

The Maroons offense finally cooled down, but just after second-year midfielder Julia Lodoen scored in the 74 minutes into the game. The Spartans were unable to get the offense off the ground, as they recorded four shots with none on goal. The team ended up losing 3-0.

“We had a solid weekend,” said Head Coach Tiffany Crooks. “We had chances to win the game at No. 2 and defending national champion Wash U before giving up a goal with 11 seconds left. That game took so much energy from us physically and mentally. I knew the game at Chicago would be very tough for us after the travel.  Chicago is incredibly deserving of the No. 1 national ranking. They are one of the best teams I’ve seen in my time.”

The team finished the week with two losses, bringing their record to 5-9-0 overall and 0-4-0 in UAA play.

The team will continue its 2017 campaign with a match at home against the University of Rochester on Friday, Oct. 27 at 7:30 pm. CWRU defeated Oberlin College 3-1 on Saturday, Oct. 21 in Oberlin, Ohio.

“Before those games, we need to rest our bodies after a long and hard weekend of play and travel,” said fourth-year defensive back and co-team captain Neha Cheemalavagu. “After that, we are planning to find ways to have more of an attacking presence, even if the other team has a strong offense themselves. We know that we can defend teams well, now we have to find ways to attack and put them on the defensive.”