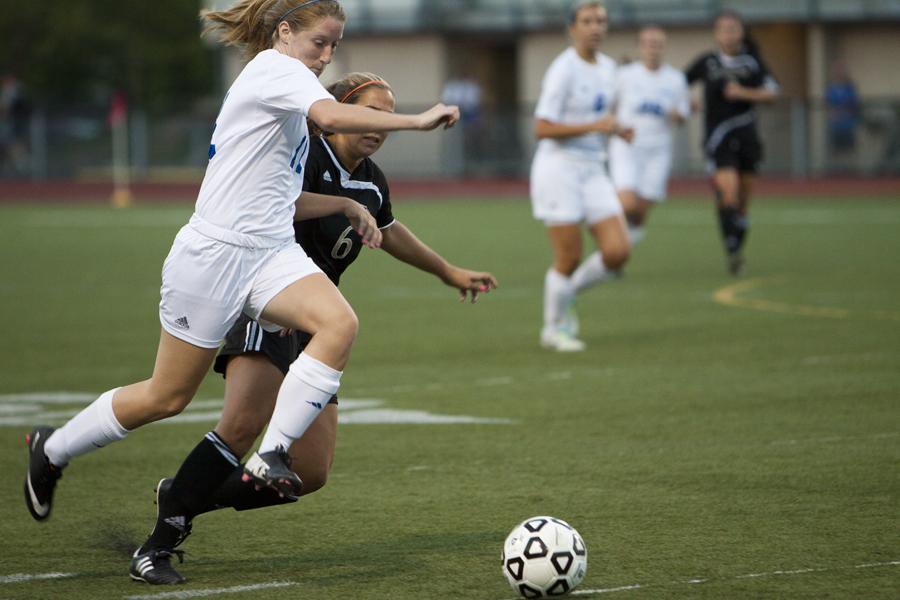 The women’s soccer team advanced to a 3-1 record after their game against Wooster on Tuesday resulted in a win in double overtime.

The women’s soccer team advanced to 3-1 this past week with two great wins at home against Heidelberg College and The College of Wooster. The Spartans easily defeated Heidelberg by a score of three to nothing in last Friday’s home opener. The game was followed by a thrilling double overtime 1-0 win against The College of Wooster when the Spartans scored the game’s only goal in the 106th minute. The Spartans have spent the week finding a good rhythm to carry them through the season. “We have spent time assessing our play,” said head coach Tiffany Crooks, “We are looking to highlight what we think we are good at.”

The Spartans’ win against Heidelberg was led by number seven, junior forward Jessica Sabers, who scored the first goal of the game in the 18th minute off an assist by Kiley Armstrong. Senior captain Leah Levey then added a goal of her own in the 36th minute. The Spartan midfielders dominated the first half, allowing Heidelberg into the Case defensive half only six times in the first 45 minutes.

Heidelberg charged back in the second half with a few strong pushes past midfield. Sabers, however, continued to lead the offense and added in blowing the game wide open when she assisted on the Spartans’ third goal, which was scored by Rachel Hammond in the 72nd minute. The Spartans dominated with 32 shots to Heidelberg’s four. The Spartans used the lead to work in other players. “Getting to play everyone was awesome,” Crooks said.

Tuesday night was a difficult win for the Spartans. The team beat The College of Wooster in a double overtime at Case Field by a score of one to nothing. The Spartans played a hard fought game against the previously undefeated Fighting Scots (4-1). “Wooster is a very good team, undefeated coming into the game and ranked 6th in the region. Getting the win against a strong opponent is always great,” Crooks said, “And finding a goal in a high pressure situation like overtime is even better.”

The Scots kept a strong presence and battled the Spartans for 106 strong minutes, as neither team was able to break through. That changed when Sabers finished off Levey’s corner kick, the game’s only goal, to give the Spartans the win with only 4:08 left in the second overtime. Regulation was scoreless even though the Spartans outshot the Scots, nine shots to two, in regular time. Case Western’s defense also played well, clearing a few almost-costly late attacks by the Scots. “I’m very pleased that we were put under pressure and able to recover and prevent scoring chances,” Crooks said, “There will always be mistakes in sport. I’m much more concerned about what happens after the mistake than I am about the mistake. Those are the moments that will define us.”

The past two games have defined the Spartans heading into the bulk of the season. The goal for the Spartans is simple. “The plan is to keep moving forward as a group, improving our chemistry on the field and starting to click even better,” said Crooks. With two strong wins the team prepares to start a four match away stand. CWRU will play away on Sunday afternoon against Wittenberg and Wednesday against Baldwin Wallace.