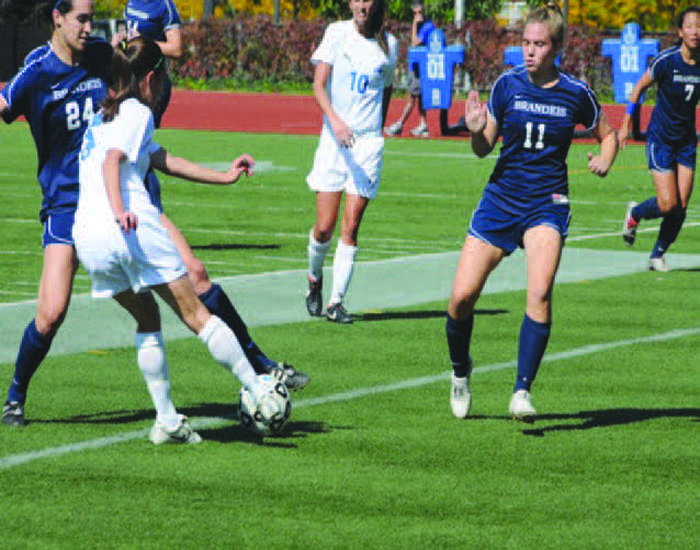 Coming off the best season in program history, the Case Western Reserve University women’s soccer team will look to replicate the 2011 season when they finished third in the University Athletic Association, going 13-4-3 overall and 4-2-1 in conference play.

The 2011 season saw the women earn their first ever national ranking, reaching as high as No. 18 on the D3soccer.com poll. The women ended the season at No. 23. They open this season ranked No. 17 by the National Soccer Coaches Association of America.

The Spartans also reached the NCAA playoffs for the first time in program history, earning the honor of hosting the first two rounds where they successfully dispatched Lebanon Valley College in the first round 3-0, before falling to SUNY-Cortland 1-0 in the second game.

Head coach Tiffany Crooks enters her sixth year at Case coming off of an impressive three-year streak where she and her coaching staff have won the UAA Coaching Staff of the year twice. Crooks was also named Coach of the Year by the Ohio Collegiate Soccer Association this past season.

The biggest holes for the Spartans to fill will be on the back line and in the goal, where the Spartans graduated three defenders and their starting goalie. First team All-UAA members Kristina Vaci and Anna Kennedy departed along with Laura Gabster and Sammy Sarett leaving senior Maeve Goede as the only returning starter on the backline for 2012.

Fortunately for the Case women, the remainder of the starting lineup will return primarily intact with the benefit of having strong senior leadership up front and in the midfield.

The women bring back four All-UAA team members from 2011, including first team midfielder Kendra Simmons, who led the Spartans in scoring last season with seven goals and four assists. Simmons is the program’s third ever All-American and was also a first-team All-Ohio selection. Also returning for the Spartans will be All-UAA honorable mentions Deena Levey, Devyn Lee, and Rachel Bourque. Senior forwards Deena Levey and Lee will hold down the Spartan attack while Bourque, a junior, will help anchor the midfield.

Other key starters returning for the Spartans will be junior midfielder Leah Levey, who finished 2011 with two goals and four assists, and senior Erica Sackett, who played as a defensive midfielder and will likely play back with to the holes left by graduating seniors.

There were no freshman among an experienced starting eleven last year, but three freshmen saw significant playing time and will look to move into the starting line up come September. Second-year defender Jessica Sabers played along the backline last season but also showed her offensive proficiency, scoring a pair of goals and assisting on four others last season. Midfielder Christine Straka appeared in 18 of the team’s 20 games last season and scored two goals while Caitlyn McGillis appeared in 19, notching a single assists.

Kennedy, who graduates from goal after one of best seasons in program history, led the UAA in every goalkeeping category and finished first all-time in Case history in shutouts (21) and second in goals-against-average (0.81). She was 18th in the nation in GAA in 2011 with a 0.49 and 14th in saves with a percentage of .889.

The name of the game last season for the Spartans was a stifling defense that was able to successfully overwhelm opponents and led to a school record 11 shutouts. However with the departure of three senior defenders and the squad’s goalkeeper, replicating those results looks to be an uphill battle for the Spartans in 2012. Looking at the team’s fixtures from last season it becomes apparent that if Case is able to score they’ve got a great chance to win or at the very least escape with a draw. Unfortunately for the Spartans, the offense was a bit on the anemic side last season, scoring just 1.50 goals per game, sixth in the UAA. Countering that, however, was the second best defense in the UAA, one that allowed just 0.55 goals per game and giving the Spartans a chance to win any game they played in. In fact, 8 of the team’s 13 victories came from by a one-goal margin and six of those games ended with Case on top 1-0. Close games are always a double-edged sword, and of the team’s four losses, all came from a 1-0 margin.

With the offense returning largely intact and the defense being replaced, it looks to be a tough and unpredictable season for the Spartans with plenty of close games. If All-American Simmons can find the lightning in the bottle that her counterpart on the men’s team, Vinny Bell, found last year, the Spartans should be in for an exciting season. However, with the team’s goals allowed per game likely to creep closer and closer to 1.00, they’ll need an improvement in offensive output if they want to reproduce last year’s historic season.

If the Spartans hope to contend for the UAA crown the two biggest games of their conference schedule also appear to be their toughest all season. Both defending UAA champion Emory University and second place Washington University finished in the top 25 last season, going deep in the NCAA Championship Tournament.

The No. 6 Eagles finished undefeated in UAA play, going 6-0-1 and lost their only game of the season in the sweet sixteen of the NCAA Tournament. They finished 17-1-2 overall. The No. 9 Bears may not have been able to win the UAA this year but they managed to outlast their conference rivals in the playoffs. The Bears finished 18-5-0 overall and 5-2-0 in the UAA and rode a hot streak into the elite eight where they lost to the national runner-ups Wheaton College, 4-2.

The Spartans face one other opponent that was ranked nationally in the NSCAA preseason poll and that is Great Lakes Region rival Centre College. The Spartans will host Centre on their home opener, Saturday, Sept. 8 at 1 p.m. at Case Field. The women finished second in the Great Lakes region, one slot ahead of the 12-3-2 Praying Colonels.

Other big non-conference games are against local rivals Baldwin-Wallace College and John Carroll University. The Spartans topped the Yellow Jackets 2-1 in double overtime last season and will host their cross-city rivals on Wednesday, Sept. 19. The Spartans lost 1-0 to the Blue Streaks at home last season. This year they’ll travel down Cedar to University Heights to take on John Carroll on Monday, Sept. 24.