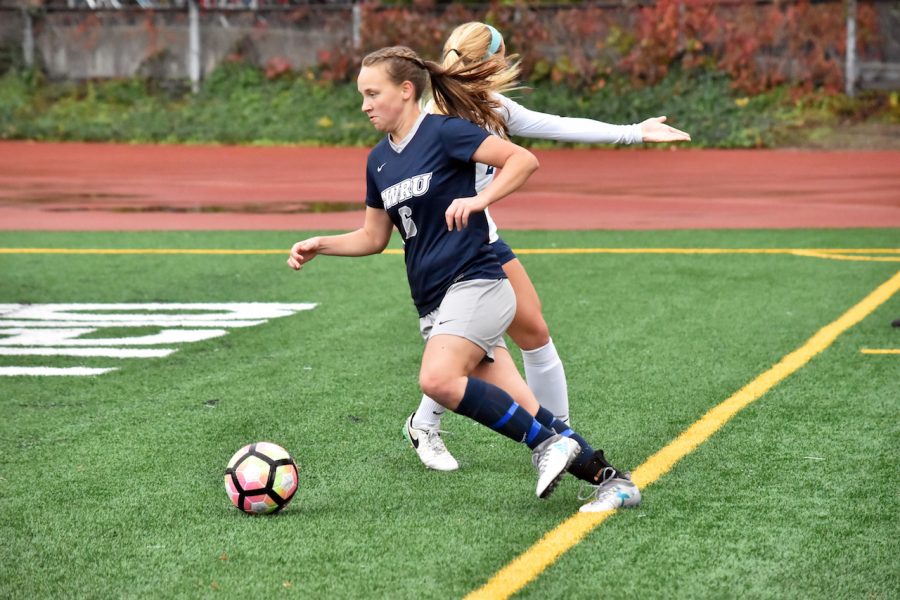 Once the women’s soccer team allowed three goals in the second half against the University of Rochester, they vowed to never let an opposing team score so quickly, so fast.

Head Coach Tiffany Crooks described her team as being very resilient and that quality was displayed at home against Emory University on Sunday, Oct. 29, as the women returned the favor by scoring three second half goals en route to a 5-2 win. It was Case Western Reserve University’s first win in University Athletic Association (UAA) play since 2014.

The match started out rather quickly, as CWRU jumped out to a 1-0 lead on fourth-year midfielder Elle Zadina’s goal from the right side of the box in the eighth minute.

The Spartans ended up pulling back ahead during minute 21 , as third-year forward Melanie Kukura recovered second-year forward Kimberly Chen’s missed shot and put in it for the goal.

The Eagles responded six minutes later to knot up the score at two, and the score remained tied going into the half.

CWRU broke open the game in the second half, starting off with a goal in minute 72 of the game as third-year midfielder Angelina Batty tapped in a shot off of Zadina’s corner kick.

The team wasn’t done yet, as third-year midfielder Emily Dickens received a pass from Chen and launched a rocket from 20 yards out to score in minute 82 of the game.

Chen received her last point on her third assist, as she delivered a cross that Kukura tapped in to score in minute 85 of the game, ending the offensive display and sealing the victory.

The motivation for the previously described three second-half goals came from the home match against the University of Rochester on Friday, Oct. 27.

The first half began as a defensive battle, as both teams were unable to score.

Rochester ended up breaking this tie in minute 55 of the game, as third-year midfielder Pamela Chen snuck a goal in past second-year goalie Lauren Unterborn.

The shots didn’t stop, as Yellowjackets second-year defensive back Liz Mastoloni drilled a shot in from the far side of the field during minute 61 of the game.

Rochester finally cooled off, but not before first-year midfielder Emily Tompkins scored in the minute 75 of the game, leading to a 3-0 CWRU loss.

“We played well over the weekend,” she said. “On Friday, we created all the looks we wanted in front of goal and outshot them. But, we weren’t a good finishing team on the evening and Rochester made the most of their chances. Sunday, the team came with a different attacking mindset and created an exciting game to watch.”

The team finished the week with a win and loss, bringing their record to 7-10-0 overall and 1-5-0 in UAA play.

The team finishes off its 2017 campaign at home with its Senior Day match against a UAA rival in No. 9 Carnegie Mellon University on Saturday, Nov. 4 at 7:30 p.m.

“Carnegie [Mellon] is always a game we look forward to and there is no shortage of a drive to win on our part,” said fourth-year defensive back and co-team captain Neha Cheemalavagu. “We’re really focusing on using all of the energy and confidence from our last win to drive a strong effort against Carnegie [Mellon]. We will watch a lot of film to prepare and make sure every moment we have on the field is focused and intense because this is our last game.”