Women’s soccer stay spooky, while the men’s team is spooked 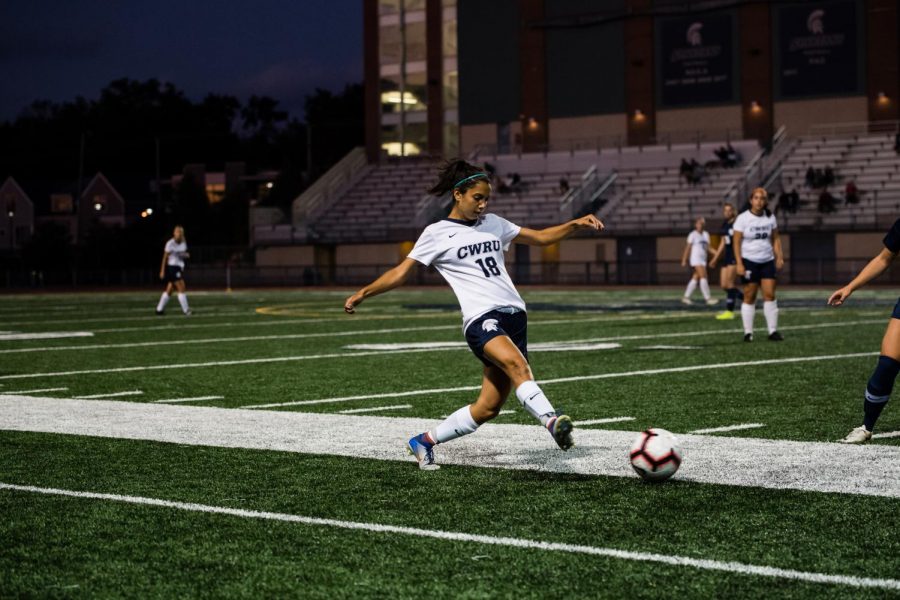 The Case Western Reserve University soccer teams continued UAA conference play on the road, with the women’s team splitting games, handing 12th ranked University of Chicago their second loss of their season with a 2-0 victory, while also dropping a tight double overtime thriller against third-ranked Washington University in St. Louis (WashU), 2-1. Against Chicago, second-year Anika Washburn broke both the single-season goals and points record, with 13 goals and 31 points, claiming the honor of UAA offensive women’s soccer player of the week. The men dropped both matches, 1-0 against sixth-ranked Chicago and 2-0 against WashU.

In Washburn’s single season record breaking game, the Spartans took control of possession early with ball control and organized spacing. First-year Merry Meyer dribbled down the left side of the 20-yard line, crossed it to Washburn in the middle of the box for a header. Meyer currently leads the team with 8 assists for the season.

Chicago counterattacked, attempting three shots in the next three minutes, all blocked by the Spartan defense, and one saved by fourth-year keeper Lauren Unterborn. The Spartans fended off two corner kicks by Chicago at the end of the first half. Unterborn continued to make saves in the second half, finishing with seven, and earning a clean sheet. With seven minutes left in the game, first-year Johanna Dunkers threaded the pass to Washburn at the edge of the goal, who sidestepped the defender and drilled a flat shot into the goal, past the diving goalie.

Against WashU, both teams struggled to score a goal in the first half. WashU aggressively took the first seven shots, coming close with consecutive corner kicks, with three headers that were blocked by Spartan defense and the last saved by Unterborn. The Spartans broke the ice to start the second half, with Washburn scoring off the penalty kick.

The game remained physical, as both teams combined for 35 fouls. At the 80th minute, WashU tied the game off a cross, and attempted three more shots as the game extended into overtime. Unterborn was crucial in anchoring the defense, totaling 10 saves for the game. However, WashU scored the golden goal to take the game. The Spartans went even with a tough opponent, as WashU is currently 6-0 in conference play and only has 1 loss this season.

As for the men’s teams, WashU caught the Spartans off-guard by scoring off a long pass to the right bottom corner of the goal in the second minute. WashU continued to set the tone by constantly attacking the Spartan defense, with a shot hitting the crossbar and another shot missing wide off a corner. Case responded by pushing the ball down for a corner by third-year Connor Webber, but WashU managed to extend the lead by scoring off a give and go at the top of the box. In the second half, third-year Seldon Magruder came close to scoring when shooting off a blocked shot by the opposing keeper, but hit the goalpost instead. The Spartans were unable to come back from the deficit in the second half.

The Spartans tried to bounce back against Chicago, attacking early off two corners, but the shots were blocked by the opposing goalie. Both teams aggressively traded shots, until Chicago scored the lone goal of the game off a corner. Although the Spartan defense collapsed onto the ball, it still laced its way into goal.

Both teams will celebrate Senior Day playing against Carnegie Mellon back home on DiSanto Field on Nov. 9. The women’s team currently looks to improve their bid for the National Collegiate Athletic Association playoffs.