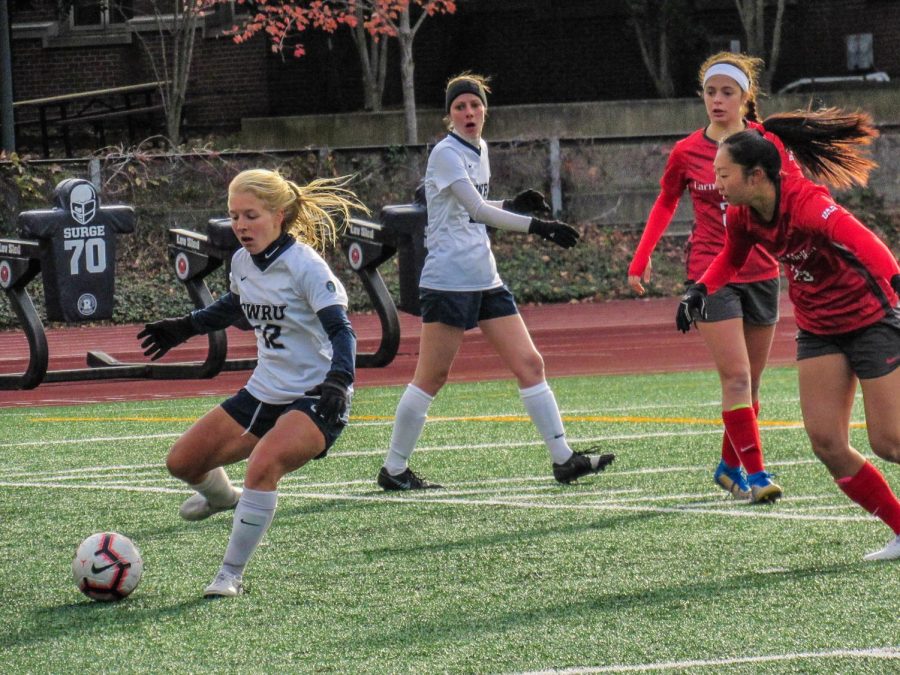 Despite a loss against Carnegie Mellon, CWRU women’s soccer team qualifed for the second NCAA tournament in the program’s history.

On Monday, the women’s soccer team received an invitation to play in the NCAA Division III Championship. This is the second time in program history that a Case Western Reserve University soccer team has ever gotten this far. The women’s team will play their first game this Friday against Wooster College in Wheaton, Illinois. The announcer on the NCAA website said that this year’s women’s team is the strongest offensive team in the program’s history.

In their last game of the regular season, the CWRU men’s and women’s soccer teams took on Carnegie Mellon University at home, with both teams dropping their senior day games, the women fell 3-1 and the men 4-0.

Even though the Spartans did not score a goal, the team led by 19 attempted shots, with seven on goal compared to Carnegie Mellon’s 13 attempted shots. CWRU dominated possession of the ball in the start of the game, taking the first four shots and setting up three corners to try to score. The Tartans of Carnegie Mellon drew first blood by scoring off a corner at the end of the first half and kept going in the second, as the ball was close in the box with not enough defenders back off a fastbreak.

Fourth-year forward Zachary Senft, who led the team with seven shots attempted, relentlessly continued to attack but did not convert a goal. Carnegie Mellon scored back to back goals in the 72nd minute, and the Spartans took six goals in the next six minutes to end the season on a high note. However, half of the goals were saved by the opposing goalie. Besides Senft, the fourth-year players were led by midfielders Brian Woo and Garrett Winter, followed by defender Nicholas Bertrand, defender Kyle Lewis and midfielder Chas Novitsky.

For the women’s team, the Tartans came out aggressive to start the game, with fourth-year keeper Lauren Unterborn notching four saves in a two minute span. However, the Spartans were caught off guard when the ball was suddenly stolen and the opposing striker zipped it into the goal. Unterborn continued to be a defensive anchor for the game, saving three shots before the end of the second half.

The Spartans counterattacked in the second half, attempting the first six shots, but Carnegie Mellon managed to score off the rebound of a blocked shot by Unterborn. Fourth-year forward Kimberly Chen scored the Spartan’s only goal from the edge of the box in the last minute from the game with the assist from fourth-year Jennifer Markley. Besides Chen, Unterborn and Markley, the team also celebrated defender Mary Kate Ford and student coach Isabel Kazour.

“I don’t know if it was the stress, emotions from senior day or the physical aspect [of the season] but it was rough,” commented Head Coach Jennifer Simonetti on the team’s performance. “Soccer is a game where anything can happen, and we [could] compete against some of the top 25 ranked teams in the country … and UAA [teams] that are competitive top to bottom.”

The women’s team had earned a bid for the NCAA Division III Women’s Soccer Championship tournament and will play Wooster College.

Simonetti said, “Refocusing as a team, I feel grateful for the opportunities we were granted and earned. I believe we have the technical skill to compete in the NCAA tournament.”