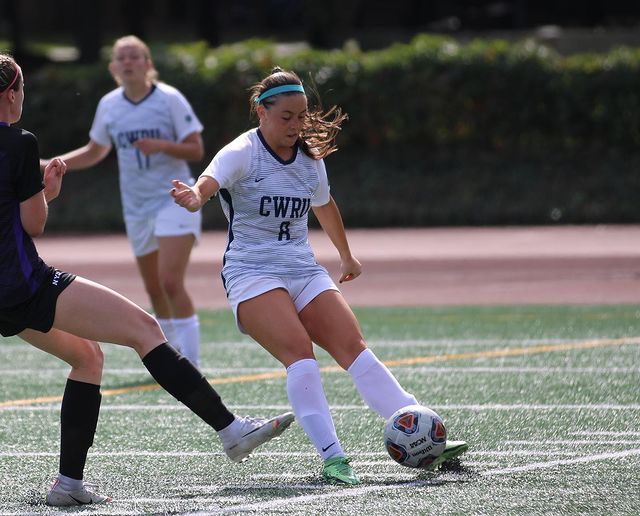 The extraordinary season of the Case Western Reserve University women’s soccer team continued last week as the Spartans improved to a 13-1-2 overall record after a 1-1 tie versus the University of Chicago Maroons on senior night and a tight 1-0 victory against Washington University in St. Louis.

Though the Maroons came out aggressive on the offensive end to start the first half and forced second-year goalkeeper Maggie Storti to make a save, it was the Spartans who struck first. Around the 10-minute mark, fourth-year forward Christina Hickson managed to pull the Chicago goalie off her line and sent a pass to third-year midfielder Helina VanBibber, who netted the goal for her third score of the season. Hickson notched her third assist in this year’s campaign and her 54th career point, climbing to seventh in all-time points in the program’s history.

The Spartans’ lead did not last long. The Maroons had an immediate response just three minutes later as Nicole Kaspi received an assist from Peyton Jefferson to tie the game 1-1.

The rest of the match was a defensive showcase,  as neither team could find the back of the goal. The Spartans did hold an 8-2 advantage in shots but could not convert those opportunities.

In the first overtime period, VanBibber took a header that was saved by the Chicago goalie. Hickson also attempted a shot, but it was blocked by the Maroon defense.

Storti played her part perfectly to keep the game tied, saving a shot from Chicago’s Hannah Rittenhouse in the second period.

The final score was 1-1. CWRU edged Chicago in total shots 15-10, with a 7-5 advantage in shots on goal. Fourth-year midfielder Anika Washburn led all players in shots, attempting three in the game. Storti played 110 minutes and made four saves, moving her goals-against average to 0.55 and a 12-1-2 record for the season.

On Halloween morning, the Spartans set out to hand Washington University their first loss of the season while also matching the program record for regular season wins. And the Spartans did just that on home turf.

CWRU came out blazing, taking five shot attempts to Washington’s three in the first thirty minutes. Sooner or later, the ball was bound to find the net. First-year forward Carolyn Koutures deflected a pass that was sent into the box by Washburn. The deflection placed the ball into an opening, which second-year forward Kati Davis took advantage of, sending the ball to the lower left of the goal, putting the Spartans up 1-0. Koutures notched her third assist of the year and Washburn picked up her eighth assist. With 32 points on the season, Washburn is one short of her own record of 33 points in the 2019 season and her 69 career points is tied with Hallie Graor (1997-2000) for second-most in CWRU history.

For the remainder of the match, the Spartan defense remained stubborn and limited the Bears to seven shot attempts total and only four in the second half. Storti once again had an impressive goalkeeping showcase, saving all four shots on goal and improving her season goals-against average to 0.51. The shutout was her second against UAA competition and her eighth of the season, tying fourth all-time for Spartan goalkeepers and placing her two games behind Anna Kennedy’s program single season record in 2011. The victory also improved Storti’s record to 13-1-2, matching Kennedy’s 2011 total for most wins by a goalie in a single season in program history.

Davis and Lazzara took the UAA Athlete of the Week honors. Davis was named the Offensive Player of the Week for her game-winning goal against Washington and her fantastic play on that end of the field. Lazzara earned the Defensive Athlete of the Week for leading a defense that allowed only one goal in 200 minutes of gameplay and drastically limited the opponents’ shots on goal.

Head Coach Jen Simonetti was especially pleased with how the Spartans performed against the two conference opponents and how the team has matured over the season.

“It was a great weekend of soccer for our program, especially knowing that it’s senior day and we’re celebrating 13 incredible players who have done so much for this program and emotions that come with senior day and all of the fans that we had in the stands,” Simonetti reflected in an interview with the CWRU Athletic Department. “The big thing for us is we’ve kind of layered in everything we’ve asked of them over the season. This weekend is when it all came together finally, and we were able to see every piece of the puzzle that we’d been asking of them.”

The Spartans will have one final regular season game on Sunday, Nov. 7 against Carnegie Mellon University in Pittsburgh, Pennsylvania. The game will perhaps be the highest intensity match of the season since CWRU can move to second place in the UAA with a win or a tie against the Tartans. But the Spartans, and rightfully so, have confidence in themselves to take on one of the top teams in the UAA.

“We have really high expectations for ourselves, especially coming off of the win against Washington,” said third-year forward Aniya Hartzler. “We know now that we can win and compete against those teams and CMU is just another challenge that we’re looking to overcome … We have a really great mindset and really great culture going into the game and I think that will help us succeed.”

Simonetti had similar sentiments about the upcoming match, emphasizing that the momentum the Spartans have built throughout the season will be key to winning the regular season closer.

“CMU is one of the top teams in the country and one of the best teams in the conference with a different style of play,” said Coach Simonetti.  “They’ll be in a different formation, they’re going to play really high intense defensively and really run at you with a lot of skill and numbers. We’ve got [a] different challenge to fight this weekend, but we’re just going to prepare our team to continue to do what we’ve been doing as a team … [and just] build on the momentum coming off of this past weekend [and] hopefully going into the NCAA tournament.”