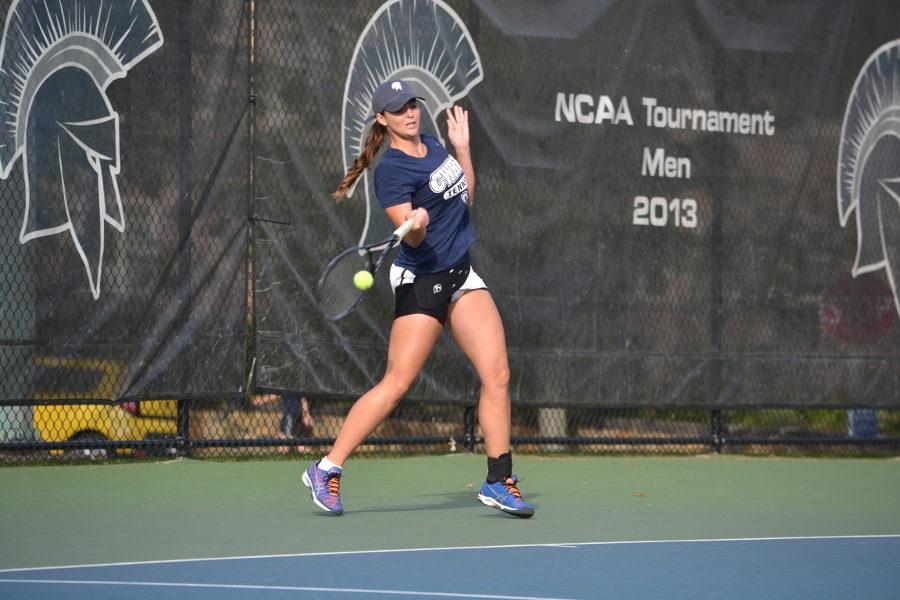 Sara Zargham returns a serve earlier this year. This Sunday, she clinched the upset win over the University of Chicago with a victory in the final singles match.

Going up against their fiercest competition of the year thus far, the 22nd ranked Case Western Reserve University Women’s Tennis team split their weekend matchups against ninth ranked Washington University in St. Louis and 15th ranked University of Chicago. The Spartans traveled up to Chicago to play the two matches, each of which went over six hours.

Head Coach Kirsten Gambrell was incredibly pleased with the way her team has been playing since their spring break trip to California.

“Since the California trip, we have really stepped it up over the last month,” said Gambrell. “We have been starting to put it together really well lately.”

The first match of the weekend was against Wash U. While the final score was 7-2, Gambrell knew the match really could have gone either way.

“The Wash U match was really close,” said Gambrell. “Two courts in the doubles and four of the courts in the singles could have went our way but didn’t.”

Gambrell was most proud of the way her team responded to the long, difficult defeat. The Spartans were able to persevere in their second match of the weekend against the University of Chicago, on the final singles court, to win a nail-biter, 5-4.

Coming off what Gambrell calls “the best win in the history of the program,” she feels her team has a great attitude.

“Even if you are just as talented [as the other team], you have to believe you are going to win,” said Gambrell. “Confidence, mentally and physically, is what it will take to win matches at [the University Athletic Association Championships].”

As the team looks to prepare for the upcoming UAA Women’s Tennis Championships in Florida, Gambrell says her team must focus on keeping the momentum they gained from this weekend and conditioning for the tough competition and harsh conditions ahead.

With seven of the eight UAA teams ranked in the latest national polls, it will take the Spartans playing the best they have all year on all nine courts in order to succeed. Gambrell believes it will be critical for the team’s doubles pairs to get the team off to early leads in order to have success at the conference level.