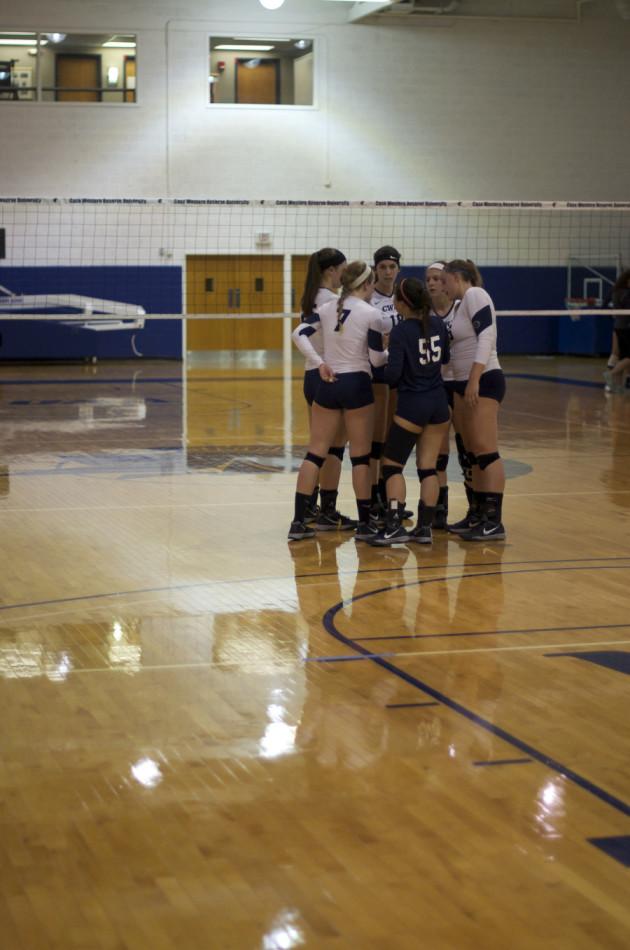 It was a spectacular night for the Spartans’ volleyball team, as they proceeded to sweep their set against white hot Baldwin Wallace University at Ursprung Gymnasium. The sweep was to the tune of 25-19, 25-15 and 25-16 final scores, ending a hot streak that saw the Yellow Jackets win five of their previous six coming into the evening. For the Spartans the victory represented their second consecutive sweep of a rival university in the Greater Cleveland area, as they were coming off a sweep of John Carroll University last week. In the bigger picture, this was the Spartans’ eighth victory in their last ten matches dating back to August 30.

Initially, the Spartans appeared to be in for a dogfight when they trailed in the first match 17-14. After taking a timeout at that point the team appeared to be rejuvenated, scoring sixteen consecutive points en route to an 11-2 run to seal the match and stun the opposition. The scoring barrage carried over into the next set as the Spartans opened the middle set on an 8-0 run and never looked back, securing an easy win. The third match was a back and forth thriller in the early stages. With Baldwin Wallace leading 13-12, however, the Spartans caught fire once again to put the set, and the match, out of reach, going on a 13-3 scoring run to wrap up the win and the sweep.

The Spartans were led in this one by outside hitter Carolyn Bogart, who posted her first double-double of the season, and the sixth of her collegiate career, in this one. She led all Spartans players for the match with eleven kills and thirteen digs. Setter Robyn Marks chipped in with her fifteenth career double-double, posting nineteen assists and eleven digs. Perhaps the most efficient player out there for the Spartans, though, was middle hitter Haley Kauffman. She recorded seven kills on only twelve attempts, good for 58.3 percent, and added three blocks on defense for good measure. On the other side, the Yellow Jackets were led by Arlayna Newcomer who registered 28 digs to lead all players for the match.

With the victory, the Spartans move to 9-4 on the season. Meanwhile, Baldwin Wallace drops to 12-8 with the loss. The Spartans go back at it on Saturday, Sept. 27 in Marietta, Ohio. They will face Otterbein University and Marietta College that day, as they participate in the BSN River City Volleyball Tournament.