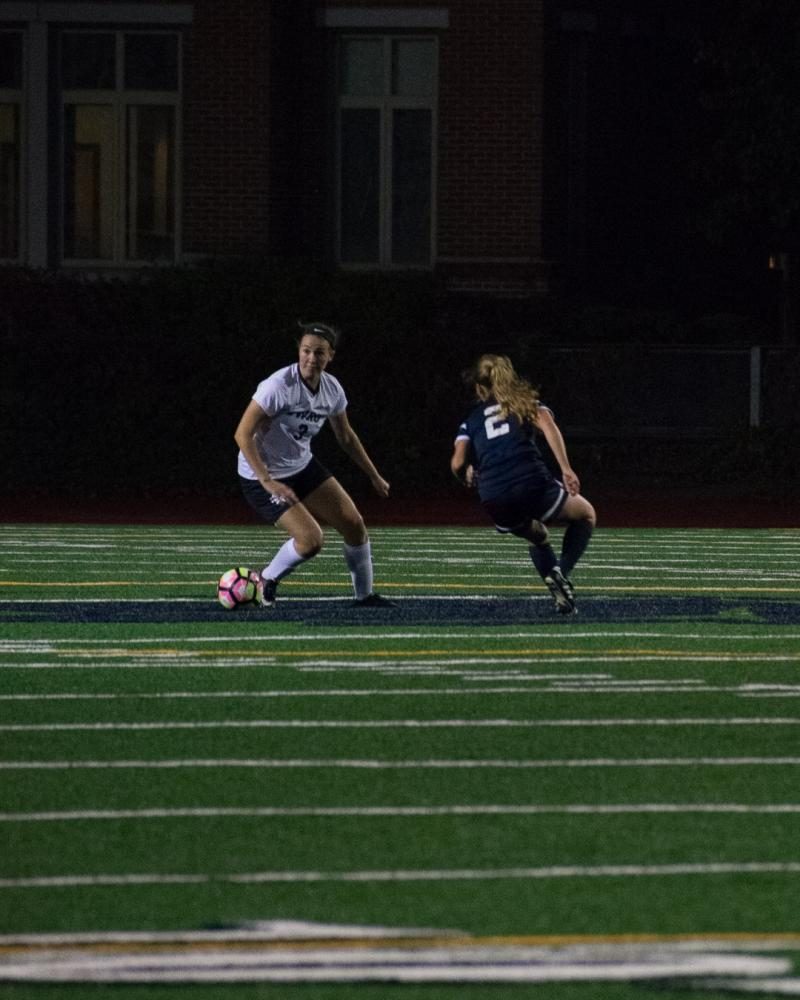 First-year midfielder Lauren LaPointe tries to dribble around a defender.

The Case Western Reserve University women’s soccer team ended last week with a spectacular overtime win at Allegheny College on Saturday Sept. 9, bouncing back from their first loss of the season to Penn State Behrend on Wednesday.

The team broke a 1-1 tie in the 96th minute with first-year midfielder Abby DeCicco’s goal, giving the team a 2-1 victory over Allegheny and DeCicco her first goal of the season. It was the first overtime game-winning goal for the Spartans since Oct. 6, 2015 when former CWRU player Mackenzie Best scored in the second overtime period against Denison University.

The game had the Spartans leading 1-0 on a free kick by second-year midfielder and defenseman Ana Petropoulos, which went in from 35 yards out in the 68th minute. However, Allegheny’s Sarah Sherwood tied the score at 1 in the 81st minute. All this buildup lead to the overtime goal by DeCicco.

Later team captain and fourth-year defenseman Neha Cheemalavagu said, “Overtime is always stressful, so I felt relief and excitement when I saw Abby’s shot go in. It was great to pull out that win after a tough loss earlier that week. It also made me feel more confident for the future since we had two new players score in that game. Having multiple goal scorers will definitely help us later this season.”

The home match against Penn State Behrend was a big defensive standoff. It remained a scoreless tie thanks to great saves by Spartans second-year goalie Lauren Unterborn who finished with six saves. The Spartans couldn’t break the tie offensively despite vigorously attacking the Lions goal, taking 19 shots in the process with many close misses.

However, the tie was broken in the 76th minute with Lions fourth-year forward Amanda Donohue’s shot through the left corner of the goal. That was the only goal of the match, and the Spartans were shutout 1-0 to earn their first loss of the season.

When asked about the loss, Head Coach Tiffany Crooks said, “Early season losses are great opportunities to take stock of where we are and what changes we can make to improve.”

The Spartans finished the week with a win and a loss and a 3-1-0 season record.

Following a loss to Baldwin Wallace University on Sept. 13, the team will play Ohio Northern University at home on Saturday, Sept. 16 at 2:30 p.m.