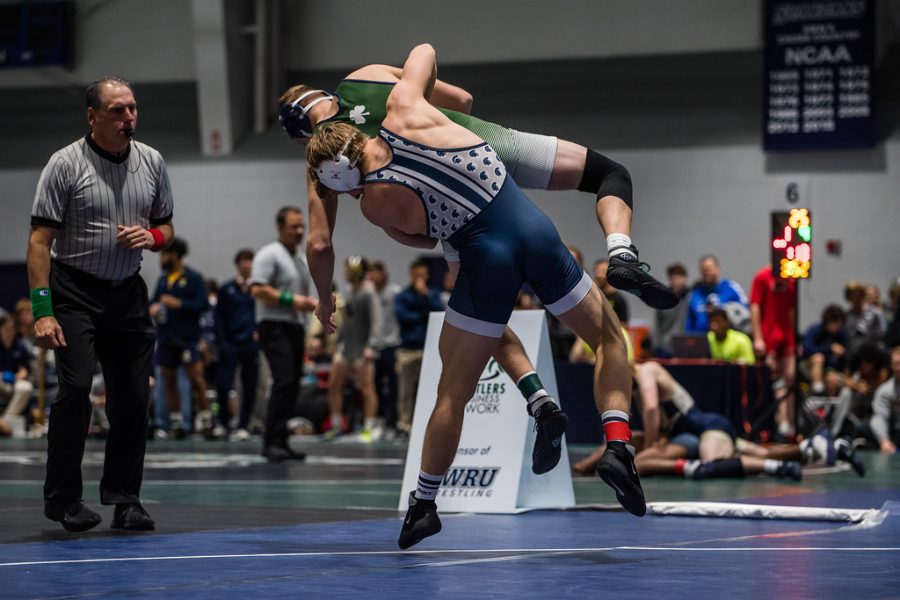 The Spartan wrestlers began their season with two tough matches against JCU and CSU.

The mats have been rolled out for another season of Spartan wrestling as Head Coach Danny Song leads the Case Western Reserve University wrestling squad into the 2019-2020 campaign.

“We want to win every time out, and equally as important, we want to continue our development as tough, smart wrestlers who live a championship lifestyle,” Song said about the goals for the team this year.

Among this strong group, Andrew Hoover and Kates earned All-UAA wrestler honors last season. Kates likewise earned UAA Rookie of the Year for his excellent season. Alec Hoover led the team in individual wins last year and will look to build upon that success in his final year. In addition, Collier has garnered national attention early on this season, earning a spot as a contender in the d3wrestling.com rankings at the 165-pound weight class. According to Song, this is the first time since 2012 CWRU has had a wrestler in any national rankings.

The Spartans have had a tough schedule to start the season. The first official competition was a tri-meet with Cleveland State University and John Carroll University. Against Division I opponent CSU, CWRU could not secure a victory, but the experience will help the team “look at where we are getting beat and form an effective action plan to make corrections,” said Song.

Although the team as a whole did not fare well against JCU, either, a few Spartans emerged with wins. Frisch secured a win by major decision at the 133-pound weight class. At 149 pounds and 165 pounds, respectively, Andrew Hoover and Collier both won by decision. Kent was the only wrestler to place in the top eight at the 2019 Ohio Intercollegiate Open, although most of the teams at the event were from Division I and II schools.

Finally, at the CWRU Mini Invitational, nine Spartan wrestlers recorded a pin, and six finished the day 2-0. Overall, it was a nice confidence boost after two challenging meets to start the season.

CWRU returns to action Nov. 23 at the Baldwin Wallace Invitational.