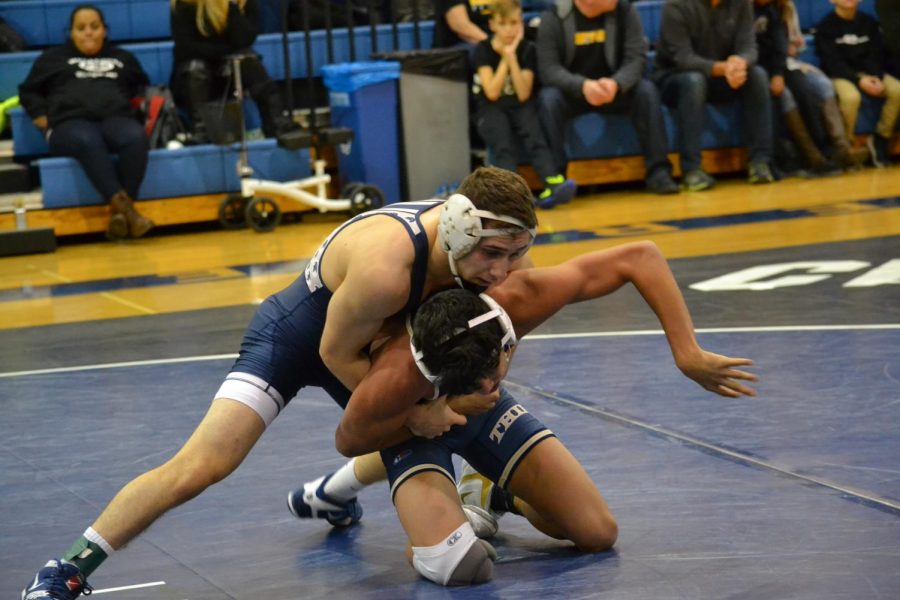 First-year wrestler Adam Kates takes on an opponent. Kates earned the title of UAA Rookie of the Year as well as an All-UAA honor last weekend at the UAA Championships.

The Case Western Reserve University wrestling team competed on Feb. 9 at home in the University Athletic Association (UAA) Championships. En route to a second place finish, the Spartans beat No. 17 New York University, their first team victory ever against a ranked opponent, but fell to No. 24 University of Chicago.

Third-year wrestler Andrew Hoover took home his second All-UAA wrestler award while first-year grappler Adam Kates earned UAA Rookie of the Year as well as an All-UAA honor. In addition, Head Coach Danny Song and his assistants won UAA Coaching Staff of the Year, the first time the Spartan staff has won the award since 1996.

“It’s a tribute to the guys,” Song said.

In the match against NYU, Kates and Hoover both pinned their opponents. Fourth-year wrestler Brian McNamara won his match via a tiebreaker. Third-year wrestler Alec Hoover claimed a victory by technical fall, and third-year grappler Isaac Collier sealed the victory with a pin of his own. The Spartans won 32-21.

However, Song did not want his team to relax after the huge victory; he wanted them to come out just as strong in their next match.

“I told the guys … we just climbed the mountain, we reached the summit, [now] we have to come down and reevaluate,” he said.

The Spartans did not fare as well against Chicago, however. Andrew Hoover and Kates were the only CWRU wrestlers to win matches, both by decision. The day as a whole was successful.

“The little things we’ve been teaching were validated,” Song said in an interview with the UAA.

The Spartans now move on to the NCAA Central Regional Championships, held at Wabash College in Indiana on Feb. 22 and 23.