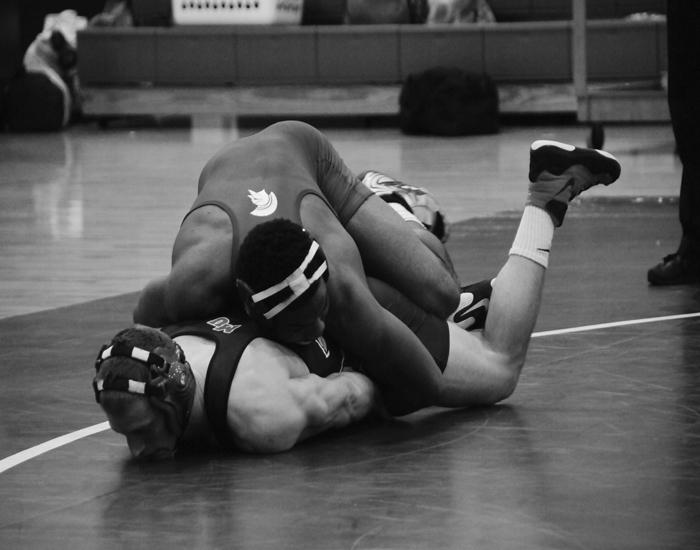 The home contests continued for the Case Western Reserve University wrestling team when they hosted the annual Si Ostrach Meet on Saturday, Feb. 18 in Horsburgh Gymnasium. The event featured competition between CWRU, Thiel College, Muskingum University, and the Rochester Institute of Technology. Thiel College won the event, posting a 3-0 record on the day. The Spartans went 0-3 to finish off dual competition for the season.

The Si Ostrach Meet is an annual event honoring CWRU Engineering Professor Simon Ostrach, who retired in 2005 after a 45-year career at CWRU. Ostrach also served as the wrestling faculty adviser. Last year, Muskingum and RIT came to participate and Muskingum was named the overall team champion with a 2-0 record.

As the last home dual meet of the season, the Si Ostrach meet also served as Senior Day. Before the match, four Spartan seniors were honored for their hard work and accomplishments on the mat. Seniors Cale Harter, Kyle Weaver, Isaac Dukes, and Kurt Jensen were featured at the center mat before the competition.

The Spartans’ first matchup of the afternoon was against Muskingum. The Muskies came into the weekend with a 2-9 dual record, giving the Spartans a good chance to secure their first dual victory this season. The score started out fairly even, as the Spartans picked up points by a forfeit in the 125 lb weight class. Dukes and Weaver also recorded decisions in the 157 and 165 lb classes respectively. The intensity started to crank up after sophomore Dylan Novisky recorded a thrilling victory over the Muskies’ Tre Martin in the 184 lb class. With the team score tied, Jensen wrestled a long bout against Luke Weber in the 187 lb class, eventually losing 9-0. This put the Muskies up 19-15.

Harter needed a pin in the 285 lb weight class to secure the team win. Harter wrestled deep into the match, racking up points. As the clock ran out in the third period, he scored a key takedown on Brian Barnhart to go up by eight points. The takedown was later nullified, as Harter was out of bounds. Harter still won the match 7-3, but it was not enough for the Spartans to turn around the team score. Muskingum won 19-18.

Before the second session, the fans took a moment to honor former Spartan wrestler Josh Schmidt, a 2004 graduate who passed away last August after a battle with cancer. Schmidt was a standout athlete during his four years at CWRU, amassing 103 wins, qualifying to the national tournament three times, and receiving the NWCA Scholar All-American award three times. Fans took a moment of silence to remember Josh as his shoes were placed at the center mat. Schmidt’s wife, former Spartan track athlete Erin McCarthy Schmidt, and family were on hand to receive his shoes. Spartan coach Chris Nader added to the ceremony with a special reading.

Following the ceremony, the action continued with two more matchups. The Spartans took on Thiel College, and after forfeiting some of the lower weight classes, they got onto the board with a win from Dukes. Dukes defeated Thiel’s Ryan Carson in the 157 lb weight class by a 10-1 major decision. Harter also scored key team points for the Spartans by defeating Kevin Heyman by technical fall in the 285 lb class. Overall, the Spartans fell to Thiel 40-9.

The Spartans’ final dual match was against RIT. The Spartans fell far behind in team points, finally striking with a strong performance from senior Kurt Jensen in the 174 lb weight class. Jensen recorded his second pin of the season on RIT’s Ben Johnstone at 4:15. Harter closed out the scoring with a major decision of 8-0 over Eddie McBride in the 285 lb weight class. RIT defeated CWRU by a score of 38-10.

Next up is the Midwest Regional Championship tomorrow, Saturday, Feb. 25. CWRU will be hosting the event, which serves as the qualifier for the national championships, to be held March 9 at the University of Wisconsin, LaCrosse. The Midwest Regional will feature teams from across the region, including Michigan, Indiana, and western Pennsylvania.