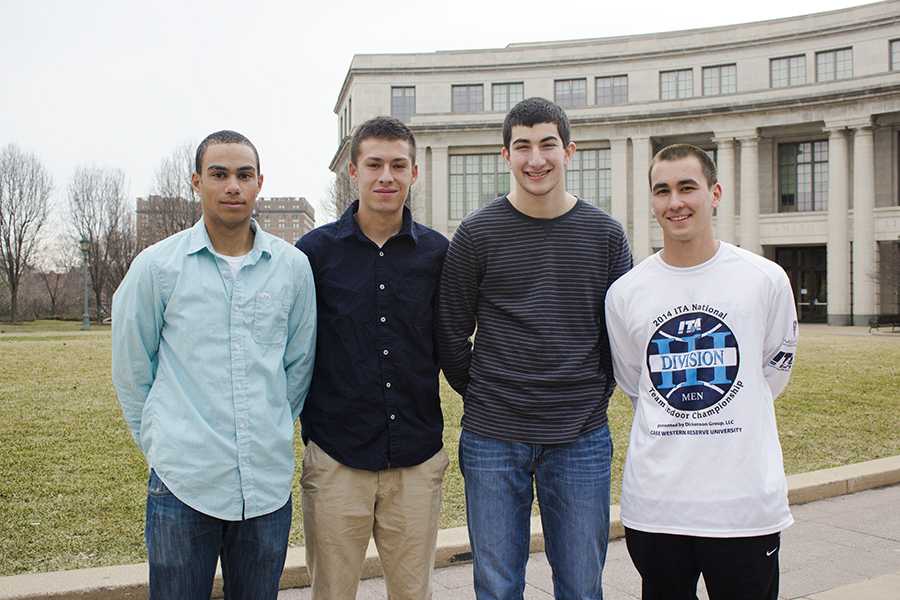 Gabriel Murcia (second from left) received the most votes in the class of 2017 COC presidential election, but was not declared the winner due to violations from his write-in campaign. Above, Murcia is pictured with his “campaign manager” Adam D. Collins (left), his “chief of staff” Ari Lewis (second to right), and his “personal assistant” Phillip Gruber.

According to Chandra, the appeal has since been withdrawn, and elections will held as described in the article.

According to Gabriella Chandra, the current executive president and president of the class of 2014, the plan for another election has been delayed due to an appeal to the election committee by a candidate. The appeal will be heard Wednesday.

On March 26, first-year student Gabriel Murcia announced via press conference (in his room to five people) that he would be running as a write-in candidate for the Class Officer Collective president of the class of 2017. He wouldn’t let not being on the election ballot stop him.

Murcia, whose campaign was immortalized in a YouTube video set to the tune of Kid Ink’s “Money and the Power,” missed the application deadline for ballot recognition. However, through some intense campaigning, helped by his friends Ari Lewis, serving as his “chief of staff”, Adam Collins, “campaign manager” and Phillip Gruber, “personal assistant”, Murcia secured the most votes in last week’s COC class of 2017 presidential election.

But he still wasn’t elected president.

According to member’s of COC’s election committee, the organization will have to hold new elections for the post next week, since both Murcia and another write-in candidate who also gained a significant portion of the vote and whose name the committee would not disclose, were found to be in violation of several election bylaws.

The race will be between the two write-in candidates and incumbent Gabriel Diaz de Leon who was on the ballot in the first election. According to election commissioner Kaleigh Judson, de Leon did not break any election rules.

However, both write-in candidates did not attend a meeting before they began their campaign efforts, and continued to campaign through the voting period. Candidates are allowed to begin campaigning after they attend an election preparation meeting and before the voting period begins.

Letters of intent will be resubmitted and an election meeting held Monday April 6. After that meeting, candidates will be allowed to campaign until voting begins Thursday at 8 a.m. The polls will remain until 11:59 Friday night, and the winner will be announced Saturday night.

Gabriella Chandra, the current executive president and president of the class of 2014, says that COC has never had this issue come up before over its ten year history, and that the group will be taking a serious look at COC’s bylaws so that this doesn’t happen again.

Both Chandra and Judson admitted that the two write-in candidates may have been confused about the election process, so they didn’t want to just disqualify both of them.

“He [Murcia] put forth a lot of effort so we wanted to give everyone a fair chance,” Chandra said.

They did say though that the write-in vote was intended as a way for students to elect classmates they wanted to run but didn’t submit a letter of intent; not for students to run an intentional campaign through.

Murcia’s video showcases various campaign efforts, including going around and meeting freshmen in the dorms, the dining hall and the library.

“My main goal was to get the word out, and let people know that I was running as a write-in candidate,” said Murcia.

Murcia served as class president in high school, and he knew that he wanted to get involved on campus.

“The first thing I did on campus was become the student assistant of the varsity tennis team,” said Murcia. “My coach really encourages us to give back to the campus and to be active members of the school.”

Murcia’s campaigning style is unusual at Case Western Reserve University, where many election candidates run unopposed. In the COC races, every position open for the three classes had only one candidate on the ballot.

“Campaigning shouldn’t be an extraordinary event,” said Murcia. “Hopefully I can set a precedent for this type of activism to occur more often.”

The YouTube video, which ends with Gandhi’s quote, “Be the change you wish to see in the world,” was posted to the class of 2017 Facebook page after the election had closed.

“At that point we were still waiting on the results, but we were confident that we had accomplished our mission,” said Murcia.
-additional reporting by Mike McKenna, News Editor