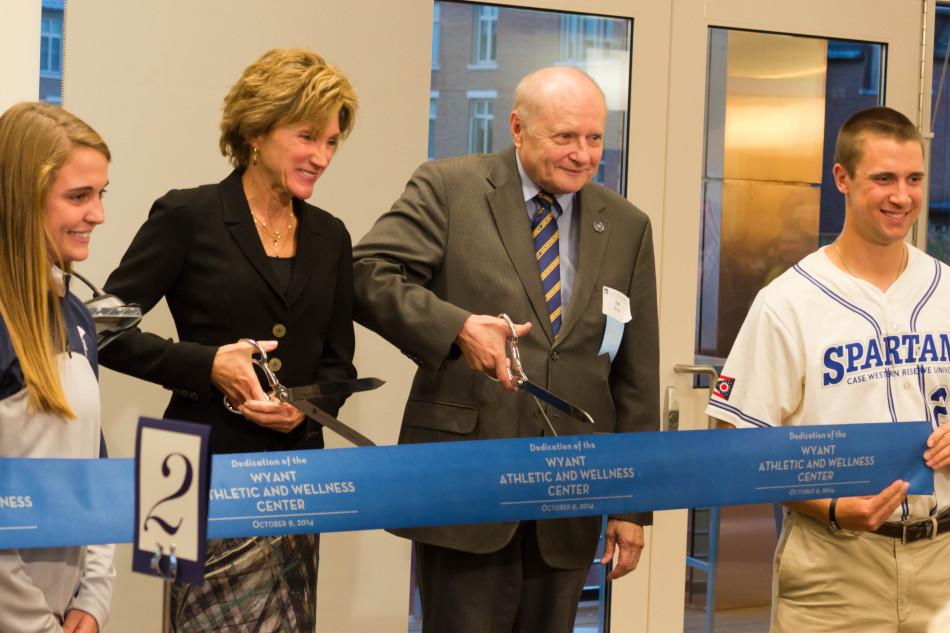 Where a year ago the Class of 2017 had their Orientation Week tent, there now stands a beautiful new athletic center. Students now patiently await the grand opening and the chance to utilize this much-needed new facility.

That time grows closer, and one of the first big milestones for the building took place last Thursday. The Wyant Athletic and Wellness Center opened its doors for the first time to a group of administrators, alumni, coaches, athletes and donors Thursday night as they gathered to dedicate the newest addition to Case Western’s campus.

“Athletics are some of my favorite memories from here,” said Dr. James Wyant who ran track and cross country as a Case Institute of Technology Alumnus and the building’s namesake. “it made it my time here wonderful.”

Case Western Reserve University President Barbara R. Snyder was on hand to mingle with the attendants and dedicate the new building.

“I see this as filling a need not just for the varsity athletes, but the health and wellness of the whole student community,” said Snyder.

Snyder also reminded the campus community of the need in her speech at the dedication.

“The Veale Convocation, Recreation and Athletic Center is an exceptional facility, but for students who live on this side of campus, well it’s a hike,” said Snyder. “According to Google maps, in fact, it is a one-mile hike, and depending on the route you choose, it is a 19 to 21 minute walk, add in the winter’s wind and snow, and the appeal of the Wyant Athletic and Wellness Center is obvious.”

The appeal is indeed obvious.

“I am excited for the weight room,” said Brooke Orcutt, a member of the women’s basketball team and one of four student athletes chosen to accompany Snyder and Wyant in the cutting of the ribbon to dedicate the center. Orcutt was joined by baseball pitcher Rob Winemiller, football player Adrian Cannon and track and field runner Rachel Tan on stage, and all of whom were joined by athletes from all the varsity teams to mingle with the donors and administrators in dedicating the new building. All the athletes expressed their excitement for the building.

The three-story building, which is 24,000 feet of workout space, study rooms and temporary team offices, will be open to the entire campus community.

“There are a few more things to get finished before we open, but athletics is working hard to open the building soon,” said Athletic Director Amy Backus.

Snyder also announced with great excitement that Wyant has committed an additional $5 million to the University to fund two additional projects. Wyant has committed $2 million to the newly announced phase two of the athletic center as well $3 million. The phase two will be a field house containing turf but is still on the horizon. Another $1 million will need to be fundraised for the building and planning completed before construction starts, but the announcement is another exciting project in the campus’ future.

The building, as many noticed, went up quickly, but it has been a long time coming. An athletic center was in the original plans for the Village, but was eventually cut. “

The process for a building like this is driven through bringing in donors first and then through the process of designing the building before moving forward,” said Gary Pillar, executive director, major gifts and assistant athletic director for development, who spearheaded the project. “Athletics is secondary in fundraising, but we were lucky to have 206 generous donors who saw Dr. Wyant’s vision.”

“It was able to go up so fast because it isn’t a very intricate build,” said Pillar. “It has wide open spaces allowing it to be built quickly, despite losing weeks to the winter last year.”

This building fulfills the need on campus and will be an excellent addition to campus with its opening in the coming weeks.

“The building is better than I could have imagined,” said Wyant.