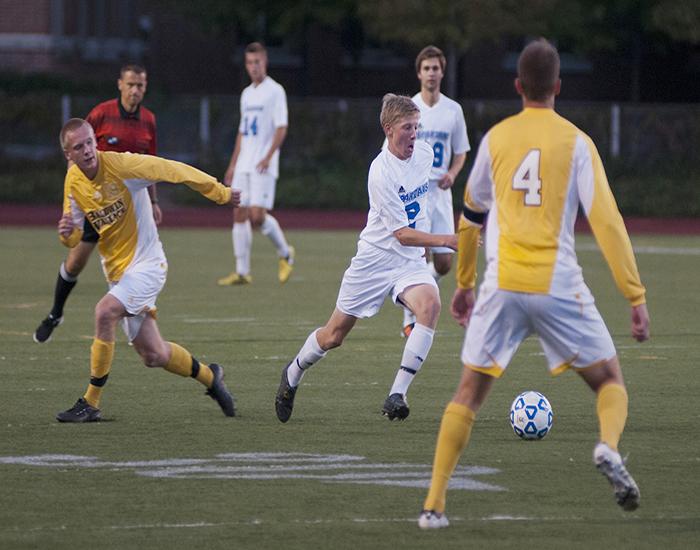 The Case Western Reserve University men’s soccer team was back in action on Tuesday night, facing the Yellow Jackets of Baldwin-Wallace College. Coming off of a devastating 3-2 loss to Olivet College in double overtime, the Spartans were anxious to turn their luck around. Unfortunately, luck was not in their favor, as the Spartans lost 3-2.

Despite ending up on the wrong side of the scoreboard, the Spartans maintained a high level of intensity throughout the match.

Baldwin-Wallace got on the board first when the brotherly combo of Pat and Michael Brennan beat the Spartan defense. Senior Pat Brennan scored his third goal of the season in the 16th minute, getting the assist from younger brother Michael.

Shortly after, in the 18th minute, sophomore Patrick O’Day was fouled in the box, which resulted in him scoring on a penalty kick and evening out the playing field with a score of 1-1. About 15 minutes later, Senior Rene Silva took a shot on goal, hoping to put the Spartans on top for the first time in the match, but the Baldwin-Wallace keeper quickly shut that down with a great save. The score at halftime remained at 1-1.

In the second half, Baldwin Wallace stepped on the gas by scoring two unanswered goals. The first goal was the result of an aggressive tackle in the box that led to a successful penalty kick by Brennan, his second of the match. Midfielder Ben Deighton scored the final goal midway through the second half off of a header. The Spartans almost began to rally when senior Aaron Mayer took a shot, but the ball just barely missed the goal.

With the Spartans unable to convert, Baldwin-Wallace ran away with the 3-1 victory.

Baldwin-Wallace was able to secure the win because of its offensive dominance. The Yellow Jackets out-shot the Spartans 12-7, leaving senior goalkeeper Ryan Koepka to face a hoard of attempts. Luckily, only six of the 12 shots by the Yellow Jackets were on target. Koepka tallied three big saves, bringing his total save percentage for the season to 68.2 percent.

The Spartans will be looking to end their losing streak when they play at Oberlin College on Saturday, Sept. 15. The game will begin at 7 p.m.

The next home game for the Spartans will be on Tuesday, Sept. 18 at 7:30 p.m. The Spartans will take on Pennsylvania State University at Behrend. The last time these two teams met, the game went into double overtime. Graduated senior Vinny Bell was dubbed the game’s hero because of his solo goal that put the Spartans on top at the last minute. Penn State Behrend will be seeking revenge this time around. Meanwhile, the Spartans will be looking to remain undefeated against this team on their home turf.