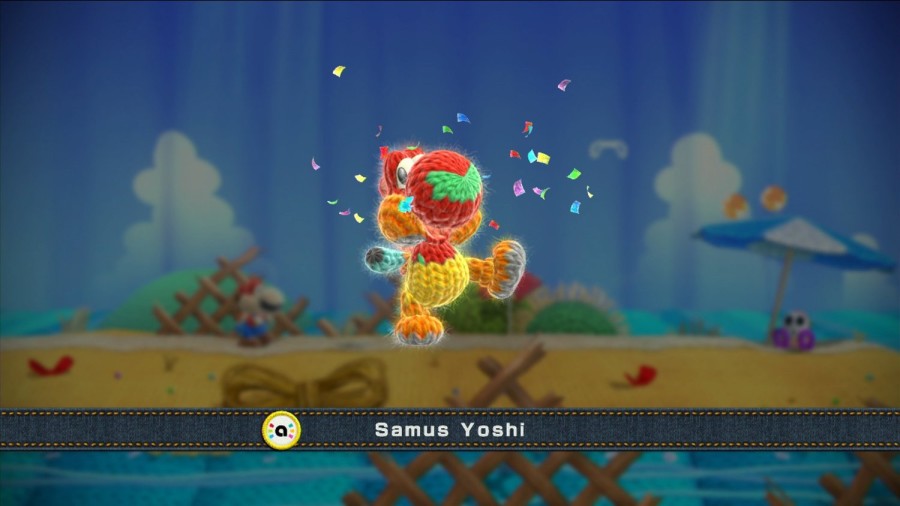 Yoshi, as well as his surroundings, have a handmade look in this Nintendo game.

Nintendo has recently gained the stereotype that its games are increasingly child-friendly, and “Yoshi’s Woolly World” is by far the most cute and cuddly game on the Wii U to date. Good-Feel, the studio behind 2010’s “Kirby’s Epic Yarn,” has, once again, employed a yarn-based aesthetic in their game, creating a timeless atmosphere that also allows for unique gameplay features.

Right when the game starts, the player is hit with the unique aesthetic of the game. Everything is made of yarn. Everything. Yoshi, the enemies, the bosses and even the very world itself is made of yarn and fabric. The fabric sags a little under Yoshi’s weight, as if a little piece of yarn has been placed on top of it. Instead of eating enemies and turning them into eggs as in past Yoshi titles, Yoshi can unravel enemies and turn them into yarn balls that can tangle up enemies or knit missing platforms into place. Even in the overworld, sometimes a pair of scissors or an open cabinet can be seen in the background, making the game feel as if it were literally hand-crafted.

The story, by comparison, is much less unique. Kamek, the evil wizard Koopa, arrives at the island of the Yoshis and unravels all but two of the Yoshi tribe into yarn bundles, planning to use them to power up Baby Bowser. However, the two surviving Yoshis attack Kamek and force him to scatter the yarn bundles across the many worlds. While a unique take on the story given the yarn-based nature of the game, it’s more or less a combination of “Yoshi’s Island” and “Yoshi’s Story.”

The hidden collectables are done very well. Sometimes a hidden cloud that contains goodies is placed at just the right point to be hit by your jump arc or a certain wall has a bow placed on it, indicating that it can be unraveled to reveal a secret path. Overall most of the collectibles are hidden just well enough that they’ll be missed if rushing through the stage, but indicated just enough to give a sense of satisfaction rather than frustration when the puzzle or hidden location is figured out.

The game is rather easy, though it increases in intensity near the end of the game, particularly when going for 100 percent completion. However players can purchase badges using beads, which can provide bonuses like immunity to lava or bottomless pits, reveal secrets or allow players to play alongside Poochy, Yoshi’s adorable yarn puppy. Every stage can be completed without these badges, though they certainly become easier with them.

The game’s music is another standout feature. Almost each stage has its own unique music, creating a unique feel for each level. One stage might have Yoshi quickly platforming across red lava yarn to an energetic rock track, while another stage is a more puzzle-based trek through a pyramid to acquire multiple keys with a quiet, thoughtful and distinctly ancient Egyptian sounding track.

However, at times, the game feels a bit inconsistent. Most levels tend to have a gimmick or two that isn’t often reused in later levels, such as a few transformations or puzzle mechanics.

That being said, “Yoshi’s Woolly World” does its job remarkably well. It’s a competent, fun platformer with a charming and unique aesthetic. Sometimes games don’t need to be hard, don’t need to punish or impress; sometimes they just need to delight and amaze. Fans of platformers won’t be disappointed, and people who like anything cute will be overwhelmed by the aesthetic of the game.