You need Ed, but he don’t need you 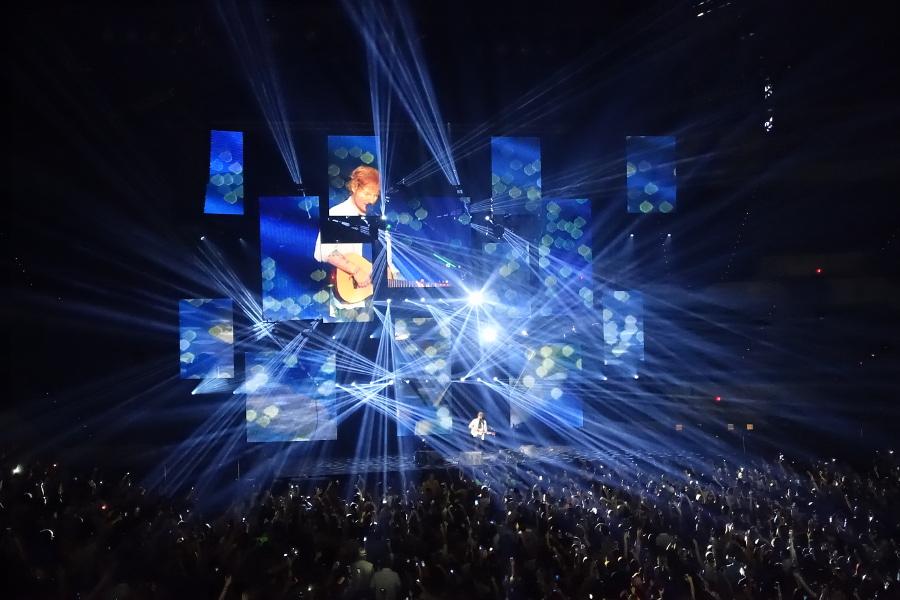 Ed Sheeren’s one man show wowed the crowd at Wolstein.

One man plus one loop pedal plus three guitars plus 14 LED screens multiplied by thousands of screaming fans equals one amazing concert experience. Last Thursday, Sept. 3, Ed Sheeran rocked the Wolstein Center on his X (pronounced multiply) album tour and filled the stadium with sound, light and color—all as a one-man band.

Upon entering, the two different five-people-thick lines looped around the whole stadium, blocking the way. Everyone was in line to buy the $35 t-shirts, $55 sweatshirts and $20 posters. Some chose to wear homemade X and + shirts, matching with their friends. Others opted to wear more typical concert clothing, rocking the crop tops and lace dresses.

Opening for Ed Sheeran was Rudimental. A fun, upbeat electronic band from England, composed of what appeared to be eight members. They combined rapping and electronic sounds with trumpet and with powerful singers of both genders. The drummer stood throughout the entire set, banging out a sick beat as the bass guitarist bounced riffs off of the keyboardist. Rudimental’s high energy was contagious, and managed to get the majority of the stadium singing along with parts of their songs.

Although it seemed like a lot of the audience had no idea who Rudimental was, the entire floor section was standing for their set, a rare occurrence for unknown openers. The act was pretty hit-or-miss, though, with some songs falling flat and forcing the audience to awkwardly stand still, while others pumped up the crowd, as evidenced by the bobbing heads and waving hands in the air.

Once Sheeran came on the stage, the screams of thousands of fan-girls immediately erupted. He kicked off the show with “I’m a Mess.” He started off using only four of the LED screens, each one showing different angles of him playing. The back-up track helped build up the song, but Sheeran had pre-recorded the majority of the instruments playing in the background, really embodying the one-man band.

He then stopped to talk to the crowd, encouraging everyone to sing along if they knew the words—even to make up the words if they didn’t know the actual lyrics. “There’s only one of me up here—I’ll need all the help I can get,” joked Sheeran. Naturally, the crowd exploded into cheers, infatuated with the British singer-songwriter.

The concert took a slower start, with “Lego House” from his first album “+.” The crowd sang along, with all 14 LED screens playing an animation of Lego pieces. He then immediately sprang into “Don’t,” a bitingly harsh song with the f-bomb multiple times in the chorus, and from there the concert took a faster pace. All the LED screens stayed out, flashing bright colors and animation.

The crowd was predominantly female, with the age ranging from as young as 11 to as old as 50. Daughters brought friends while mothers chaperoned, but everyone knew the words to at least one song, regardless of age. Couples cuddled cutely to Ed Sheeran’s more lovey-dovey songs, and rocked out together to his fast-paced songs.

When Sheeran sang “Take it Back,” he showed off his rapping, which was well-received, especially when he rapped “I’m a singer that you don’t want to see shirtless.” Thousands of girls screamed at that line, protesting and insisting that they would love to see him without a shirt.

“One” brought the concert down to a mellow state. Sheeran asked everyone to turn the flashlights on their phones and wave it in the air throughout the song, and the whole stadium was instantly filled with light. The LED screens played an animation of a cartoon couple falling in love, adding to the sweetness of the performance. Even with the impressive sound system, you could still hear all the voices singing along, and all the lights revealed the outlines of couples embracing and swaying along with the music.

Sheeran then started playing “Bloodstream,” a song that showed off the effectiveness of the loop pedal he had. He recorded and played back the different parts of the song in real time, building the end of the song into a huge jumble of overlayed sound, riffing for longer than the studio version. The crowd swayed and jumped around, bathed in the red and blue lights from the LED screens.

He slowed down the concert with another ballad, “Tenerife Sea,” and then brought back his more pop-inspired sound with “Runaway.” However, Sheeran also showed his emotional side with “Afire Love,” a touching song about the love between his grandfather and grandmother, detailing his grandmother’s battle with Alzheimer’s and subsequent death.

Before “Afire Love,” he stopped to talk to the crowd, asking everyone to please remain quiet and to not sing along for the next song. He waited for everyone to stop screaming, while some very insistent fan-girls continued to randomly scream, exasperating the rest of the audience as a chorus of “SHUT UP!” followed every outburst.

After telling the crowd to ignore the screamers and riffing the same chord for a few minutes, the arena finally fell silent. Sheeran then started singing, with very simple white lighting and only four LED screens on, showing different angles of the singer and his guitar. The light from the cell phone screens recording his performance added to the ambiance, and nearly everyone remained quiet throughout the entire song, watching Sheeran sing. He kept his eyes closed, even when a few people couldn’t control themselves and started screaming again.

Next up was another romantic song, “Thinking Out Loud.” He followed with “Give Me Love,” a song off of his first album, “+.” He started off playing the guitar, then used the loop pedal to continue the sound, setting his guitar down as he started vocally freestyling the bridge, repeating “give me love now, love now.” The screens focused on him before showing the audience as he continued with his repetitions.

He ended the concert with “I See Fire,” a song that he wrote for “The Hobbit.” When he left, incessant screaming followed him out until he came back out for his encore. As soon as Sheeran came back onto the stage, the screams intensified as he spoke: “I’ve got an encore for you all now.”

Sheeran started with “You Need Me, I Don’t Need You,” and while the studio version is only a little under four minutes long, he sang the chorus a few more times at the end and even bust into some freestyle rapping. Sheeran then taught the crowd a few different harmonies to sing back to him before going back to the freestyle rapping. All 14 LED screens displayed bright red patterns and an animation of a hand emphasizing the chorus—it may sound weird in writing, but Sheeran made it work. The song easily reached eight minutes in duration, with the crowd echoing the chorus at one point and Sheeran leading a chant of “O-H-I-O!”

The end of the encore brought “A Team” and “Sing,” his most popular songs. When he reached the end of “Sing,” he had everyone sing the famous “oh’s” in the chorus, and said to keep singing those oh’s well after the concert, and to wake up singing them the next day. He then ended the song and ran off the stage, with the audience still singing the “oh” melody long after he was gone.