You won’t run away when you hear this band 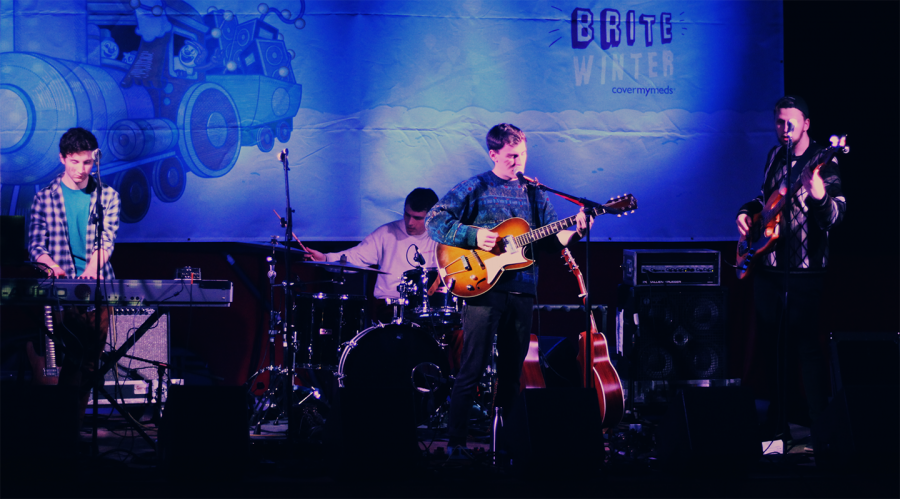 What started as a name for a fake band has transformed into a captivating alternative folk group. A friend of guitarist and lead vocalist Nick Davenport invented the band to deceive her carpool driver, a self-proclaimed music maven. Years later, Suitcase Runaway has performed in over half a dozen cities and captured the attention of listeners in 26 countries.

Suitcase Runaway’s most recent performance was on Feb. 23, at the Brite Winter Music & Arts Festival. They played a variety of songs, including their newest song, “Maria.” Band manager Kenzie Zauner calls it “her favorite” and that she “can’t get it out of [her] head.”

The band also passed out pins and “bootleg” versions of a last live performance in December at Mahall’s in Lakewood. “We wanted to make an artificial bootleg, so we burned CDs and put it in brown paper bags with our logo stamped on it,” drummer Luke Condrich said.

Their logo is a complex flower designed by Davenport. “I had a notebook of song lyrics, and I had doodled that on the cover,” Davenport said. “I simplified it a bit, and we usually put our band name around it.”

Davenport also designed merchandise sold at an earlier show. The rain boots design on the baseball cap is a nod to their song, “Rain Boots.”

Although Davenport has been writing lyrics for years, the band did not come together until 2016, with keyboardist Jared Muller joining last year.

The four attended St. Edward High School together, and their chemistry is evident in the flawless flow of their music. Shockingly, Muller admitted their last practice before last week had been close to two months earlier.

“We tried to set up a band meeting over FaceTime, but midnight to 2 a.m. was the only time everyone was free,” bass guitarist Geoff Webb said.

Busy schedules and distance attribute to this. Webb and Condrich live in Columbus, Ohio, where Webb studies film at Capital University and helps produce television at Spectrum News. Condrich, who has played the drums since he was nine years old, studies finance at Ohio State University.

Muller and Davenport both live in Cleveland, where Muller is studying to be a studio engineer at Cuyahoga Community College and Davenport works at Woodshed Stage Art, a print shop that has worked with the likes of Bruce Springsteen, Elton John, Drake and Fall Out Boy, among others.

However, this distance does not deter the members from making the music Cleveland.com called “sunshine-injected folk-rock.” Muller describes their sound as alternative folk music, with an emphasis on storytelling.

As the main songwriter, Davenport is responsible for this. He gleans information from his dreams, his memories and his imagination. For example, the inspiration behind “Chinese New Year” was a setting he imagined, borrowing liberally from memories of a trip to San Francisco.

This storytelling attracted many spectators, including second-year student Claudia Jazowski. “The Flats’ industrial terrain and Brite Winter’s eclectic display of music and art are an accurate representation of Cleveland and its culture,” she continued.

The Flats is only the latest place at which Suitcase Runaway has performed. Their favorite venue is Mahall’s 20 Lanes, but have also played at other local venues like Big Room Bar, Grog Shop and Blank Slate Elyria. Other performances include live sessions at Ohio State University and Baldwin Wallace University.

Suitcase Runaway even organized a mini tour and road trip in May of last year, with performances in Brooklyn and Rochester, New York. “We had a really good time with Winnie the Winnebago [the band van],” Condrich said. “Geoff even befriended a toad named Tim in the Adirondack Mountains.”

As for the future, members are optimistic. “We’re just making a run at it right now,” Muller said, “but I really think we could make it.”