“Zack Snyder’s Justice League” is an overdone, bloated mess. I still loved it.

Streaming recommendation of the week 4/2/21 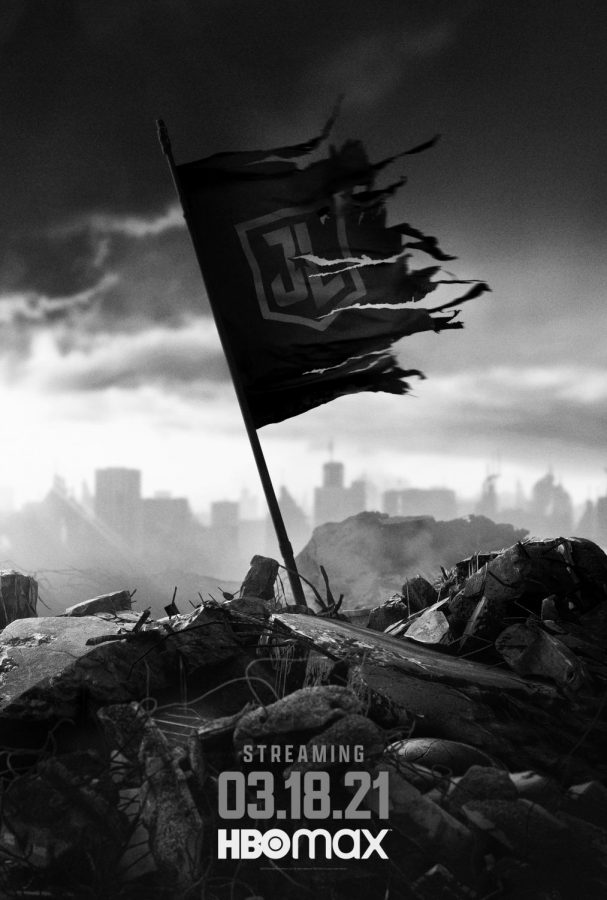 After years of waiting, experience the Snyder Cut in all its messy glory.

If there’s any one genre that’s defined the last decade of film, it’s been superhero movies. Best epitomized by films like “Avengers: Endgame,” the genre has been buoyed by safe, blockbuster fun, endless teases for sequels and a general homogeneity in thematic content.

While some films diverge more than others in terms of style, the underlying formula of action, humor and entertainment makes it easy to see the pre-packaged nature of the wildly successful Marvel Cinematic Universe.

While this uniformity might be creatively stifling, the film adaptations of Marvel Comics are successful for a reason: they’re pretty consistently good movies. By ensuring a certain base level of quality, audiences have been drawn to theaters year after year to see where the film equivalent of a soap opera goes next. Blockbuster films don’t always need to be high art. Sometimes watching the cinematic equivalent of an amusement park ride is enjoyable in its own right.

The success of Marvel Studios becomes more apparent when contrasted with the track record of their apparent competitor, DC Films. Historically, adaptations of characters from DC Comics have been more successful than their Marvel counterparts, with 1978’s “Superman,” 1989’s “Batman,” the ‘90s DC Animated Universe and 2008’s “The Dark Knight” all marking landmarks for the superhero genre, both critically and commercially. However, as Marvel has become ascendant in more recent years, DC has repeatedly dropped the ball in setting a similar shared cinematic universe, despite featuring more iconic characters like Superman and Batman, compared to the likes of Iron Man and Thor.

While a series of misguided corporate decisions have led to the state of the DC film universe today, many have attributed DC’s lack of success to one man: Zack Snyder. Starting with the 2013 Superman reboot film “Man of Steel,” Snyder was essentially given the keys to the creative kingdom, guiding the universe and deciding the major story decisions. By writing and directing all the major DC movies himself, Snyder imbued a more personal and almost auteurial brand to a genre that is generally known for its sameness and corporate nature. Ideally, it would have been the counter-point and foil that the Marvel films needed, showing the diverse array of superhero stories that are possible.

It’s too bad, then, that Snyder’s personal brand seemed to be one of dreariness and ham-handedness. “Man of Steel” started the current film series with a new take on Superman that tried to ground the historically hopeful and optimistic character in a darker and grittier reality. This wouldn’t necessarily be a bad thing––new reinterpretations of iconic characters can sometimes be enlightening and modernizing. Unfortunately, “Man of Steel” found itself with nothing to say in particular, and instead provided a relentless downcast tone, gratuitous Jesus metaphors and unlikable characters who are more interested in pining for a savior than actually being interesting. This resulted in the worst third act of a blockbuster I’ve seen in years, with Superman’s final confrontation against the main villain––General Zod––causing the complete destruction of the city of Metropolis in an overwhelming, noisy fashion. Bringing direct visual comparisons to 9/11, the final fight ultimately does more to depress viewers than uplifting or inspiring them, as a proper Superman story should. No matter how grounded or realistic one wants to make a story, the general appeal of the original character should remain intact, and ultimately “Man of Steel” failed in that respect, wasting a solid performance by Henry Cavill as Superman.

This was only followed up with the utter abomination that is “Batman v. Superman: Dawn of Justice.” Again following the model of “Man of Steel,” the 2016 film aimed to bring contemporary American issues into superhero storytelling and tell a more grim storyline around the characters. This might have been laudable, but the ultimate construction of the film lead to an almost superfluous experience that seems to misunderstand the core appeals of the title character. The general premise of a war-hawk like Batman (played by Ben Affleck) seeking vengeance against Superman for the cataclysmic destruction in “Man of Steel” seems promising but is smothered by obnoxious action, clumsy metaphors and unnecessary side plots. This includes Lex Luthor’s goal to create a “Doomsday” monster, the introduction of Gal Gadot’s Wonder Woman, and an entire political subplot featuring Justice League members that goes nowhere. It doesn’t help that the entire plot turns on some questionable dialogue involving mothers at the end. All of this combines to create a jumbled mess, filled with hours of battle noises and dreary speeches.

After two duds in the view of the general audience and critics, it’s no wonder why Warner Bros., the studio behind DC Films, was nervous about giving Snyder the reigns again. Despite these reservations, Snyder continued work on “Justice League,” the first live-action film adaptation of the iconic superhero team. After completing much of the film, Warner Bros. got cold feet upon viewing an initial cut and hired Joss Whedon, the director of Marvel’s “The Avengers,” to rewrite the script and reshoot much of the film. After Zack Snyder’s daughter, Autumn, died by suicide, Snyder left the project entirely to focus on his family, and Whedon proceeded to make an entirely new version of the film, utilizing only 10% of Snyder’s version. The final theatrical cut of “Justice League,” released in 2017, aimed to remove the bloated and dark tone of the previous Snyder films, with a much shorter runtime and a much lighter tone, including much more humor in a manner reminiscent of Marvel films. Ultimately, this version was widely panned and was a box office flop, with many fans feeling betrayed by the seemingly corporate nature of the film after the DC films had initially promised to be more artistically free endeavours. The failure of the film also led to the complete scrapping of the shared universe that the series had built up and instead birthed a focus on more solo films such as the upcoming 2022 film “The Batman,” which will star Robert Pattinson.

All of this led to a years-long online campaign by Snyder devotees to #ReleaseTheSnyderCut and distribute the original version of the film, as envisioned by Zack Snyder. The movement gained quite a notoriety for the vitriol present within the fanbase, with many reports of harassment and extreme behavior towards any opposition. However, various stars of the DC films joined on the bandwagon, including Affleck and Gadot, seemingly proving to fans that there was a version of the film ready to be released. For a long time, it seemed to be an impossibility for the “Snyder Cut” to ever be released, as it would amount to almost an admittance that the studio’s interference with Snyder’s vision had been misguided, but opportunity arose after the merging of AT&T and Time Warner and the subsequent development of a unified streaming service: HBO Max.

With a new streaming service that needed promotion and content, a release of Snyder’s cut seemed like a perfect fit. One slight problem––the film wasn’t actually finished yet, leading to an additional $70 million to be spent by HBO to complete the CGI and shoot entirely new scenes, with Snyder returning to oversee the final release. All this resulted in the March release of “Zack Snyder’s Justice League” on HBO Max.

So, Snyder’s cut has finally arrived. It’s four hours long and it is in a 4:3 aspect ratio, making it quite a unique film and definitely the most distinctive superhero film driven by artistic vision. But is it any good?

Well, it suffers from the same issues a typical Snyder film does, including sensory overload in action scenes, stilted dialogue, gratuitous slo-mo, hackneyed allegories and a bloated pace. Despite all this, I really love it, because Snyder seemingly has accepted that his films are dumb, and he embraces it.

In this odyssey of a film, Snyder seems to be willing to have fun with his grandiose spectacles and doomsday plot, while also having the space to delve into each individual character that makes up the titular team. Somehow, with its length, the movie acts as both a “build-up” film and a “pay-off” film, delivering the quintessential “building the team” storyline alongside impressive confrontations. Full of dramatic imagery and tied together with a bare-bones plot, we get superhero drama at its greatest, creating an epic tone befitting mythological characters such as the Justice League. It also helps that this film is great by comparison to the theatrical cut, with an actual motivation for the villain this time around and proper character development for Ray Fisher’s Cyborg and Ezra Miller’s Flash, as they both deal with parental issues and the pressures of living up to expectations.

Really, it makes one question why this cut would be shelved. The length is obviously an issue, but the bones of the production are solid, with likable characters, good team dynamics and even some solid humor. The added action scenes somehow manage to avoid the overwhelming qualities of its predecessors, instead making for some epic superhero fun, with combined team attacks and some of the most jaw-dropping set pieces in superhero films.

Ultimately, despite its uber-long length, it goes at a solid pace, with the film divided in six parts, each marking a good time to take a bathroom or snack break. I don’t think it really needed to be four hours, however, with many superfluous scenes, including a portion of the film dedicated to fixing Batman’s plane and a way longer than necessary epilogue that sets up films that will probably never happen. Either way, this is Snyder’s vision in every aspect, so I suppose it makes sense that everything possible was added in.

Is it perfect? Of course not, but it’s definitely the closest thing superhero movies will get to a cohesive unique vision, while still not taking itself too seriously. It’s not quite cinema, but it’s still worth props for commitment to a distinctive conception and it definitely delivers some of the greatest superhero moments that one could ask for. It’s a big dumb superhero movie that revels in its own genre, and you have to respect that.