“Zelda” turns 35—the legend goes on 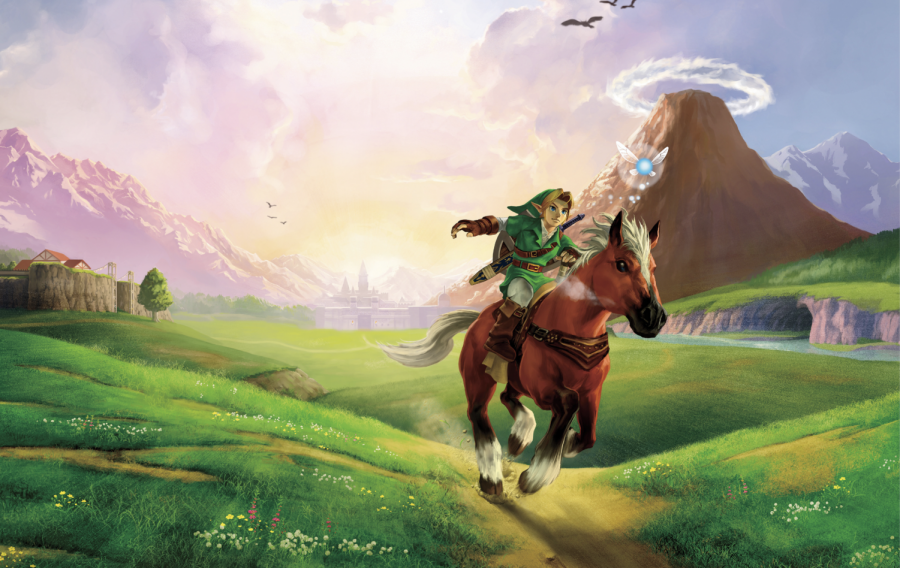 Ride throught the kingdom of Hyrule and celebrate the anniversary of the iconic "Zelda" video game franchise.

35 years ago, the gaming world was introduced to “The Legend of Zelda” and it has never been the same since. The fantasy-adventure series has consistently set the bar for what video games could be and what they should strive to do. It says something when multiple games in the series are contenders to be the general greatest video game of all time, with each having their own valid reasons.

The general premise is all mostly the same, with each game having you play as Link, the mute elf-boy who must save the kingdom of Hyrule and Princess Zelda from the villainous pig-demon, Ganon. Toss in some sacred relics, quirky characters, fantasy races, puzzle solving and exploration and you’ve got yourself a reliable but highly adaptable formula that can shift from game to game.

It is impossible to overstate the impact each title in the series has had on the gaming landscape. Released on Feb. 21, 1986, the original game immediately set the standard for what an open world adventure game could be, despite being restricted to an 8-bit system. What’s remarkable about the game is the sheer trust it has in its player. When describing the inspiration for the “Zelda” series, creator Shigeru Miyamoto often recounts his childhood explorations of the Japanese countryside as a child and his wish to recreate that feeling in his games. That feeling of open-ended exploration is tantamount to “The Legend of Zelda.” Placed in the middle of a field with no directions, the player is completely self-directed and basically told to figure out what to do from there as they traverse the large map, the first open world in any video game. Within the world, you explored several “dungeons,” or maze-like puzzle areas, that put all your skills to the test, defeating enemies and bosses as you unwound the mysteries of the lair. This traversal was also facilitated by the invention of in-game saving, starting the shift within video gaming away from the medium’s arcade roots towards a more long-form and versatile style.

After introducing these themes of exploration and adventure in the original “Zelda,” 1991’s “A Link to the Past” followed it up to create the template that all future adventure quest-based games would follow—a much more detailed and realized world that contained purpose around every corner. This resulted in a structure that allowed for better pacing and narrative, while still facilitating proper uninhibited exploration of the open 16-bit Hyrule.

Then, of course, there is the seminal “Ocarina of Time,” which remains to this day the highest-reviewed game of all time, and there’s a good reason for that. While “Ocarina” may no longer be the “best” game you can play today, it set the framework for what action/adventure games would be for the next two decades, completely redefining how players thought about combat and movement in a 3D space. Upon its release in 1998, “Ocarina of Time” was the game that transitioned the “Zelda” series from a 2D top-down game to 3D. Coming out at a time when many franchises were trying and failing to make the switch, “Ocarina of Time” made it look easy, introducing intuitive ways to move a camera around and a massive 3D world (for its time) to explore and save. Beyond that, “Ocarina of Time” also expanded what a video game story could be, creating a quintessential coming-of-age journey that travelled through time, delivering a somber message about growing up.

It’s direct sequel, “Majora’s Mask,” is no less noteworthy in the eyes of its fans, though for very different reasons. In a combination of “Groundhog Day” and Lovecraftian dread, the game was “Zelda” at its most creative, with Link forced to reverse time over and over again to prevent the end of the world. The entire game is on a 72-hour clock. Meaning, if Link does not play the Song of Time on his ocarina before the three days time, he will lose all progress made in that time period, forcing the player to go through all the emotions that the end of the world can evoke all over again. “Majora’s Mask” is unlike what anyone would have expected a sequel to “Ocarina of Time” to be, showing how willing the series is to experiment with its own formula in order to elevate inventive gameplay mechanics and deeper themes.

The next major “Zelda” release would also be my first experience with the series. 2002’s “The Wind Waker” was a decidedly more light-hearted and kid-friendly adventure compared to its immediate predecessor, but with its new tone, it injected a whole new sense of charm and energy into the series. While fans at release were turned off by the childish bright visuals and easy-going tone, “The Wind Waker” introduced a world that anyone could fall in love with, as a much more expressive and adorable Link sailed across the deep blue sea in his new adventure. With a much more interconnected world, the game provided a richness previously unseen in games, and again proved the series’s willingness to change from entry to entry, even at the expense of initial negative reactions from fans.

Sometimes pressures to please fans ultimately slip through to the final product, however. “Twilight Princess,” released in 2006, was the “Zelda” game for all those expecting a proper follow up to “Ocarina of Time,” essentially rebuilding the world and storyline on a far greater and more epic scale, but lacked the originality and groundbreaking nature previous entries were filled to the brim with. Despite this, the “Zelda” formula is rock-solid by itself, so even an unoriginal “Zelda” game is an amazing game in general.

2011’s “Skyward Sword” was certainly more inventive in some aspects, utilizing the Wii’s motion controls to their utmost in order to mirror Link’s sword movements, but the linearity of the structure took away from the exploration and puzzle solving that fans fell in love with. While the controls were certainly all-new, the game hasn’t had the same seismic impact on the industry that is expected from a “Zelda” game; the increased focus on story and dogmatic devotion to series tropes in the end hindered the final product. In the series’ attempt to tell a grand origin story for the entire franchise, “Skyward Sword” ultimately felt bogged down and padded out, too insistent to hold the player’s hand and not providing that same trust that the original “Zelda” had.

The “Zelda” team must have also understood the growing staleness in the series because otherwise we never would have gotten a game like “Breath of the Wild.” Released in 2017, “Breath of the Wild” featured a bottom-up rethinking of every aspect that makes a “Zelda” game a “Zelda” game, from the progression of the gameplay to the color of Link’s clothing. By stripping “Zelda” bare, the game went after what made the original so special: the freedom. Featuring a completely-open structure, “Breath of the Wild” afforded players more freedom than typically seen in a video game, with the entire game being unstructured, solely focused on player choice as they explored the expansive open world. Besides a short tutorial, every bit of the game is optional, and the player can even go after the final boss from the very start, though they probably wouldn’t make it very far. With this defining theme, every journey a player makes through “Breath of the Wild” is their own. Rewarding experimentation, every aspect of the game is built around the understanding that the player could be approaching an obstacle from any angle, with any amount of equipment. All this is made possible by the impossibly alive world, with a robust physics and chemistry engine that facilitates interactions between every single object in the game, allowing players to set grass on fire to create a wind updraft, or cut down trees to cross ravines, or to use metal objects to attract lightning strikes during a storm. With “Breath of the Wild,” the “Zelda” series once again was defining what video games could be.

Now in its 35th year, “Zelda” is more alive than ever. With a remaster of “Skyward Sword” releasing this July and a direct sequel to “Breath of the Wild” on the way, the future of the series is bright. Due to the continually changing nature of the series, “Zelda” will always mean something different for each generation of fans. When I think of “Zelda,” I think of childhood days exploring islands and sailing across the ocean, sometimes handing off the controller to a friend in order to solve difficult puzzles. Those memories of “The Wind Waker” will always be with me, as players before and after me will always have their memories of “Ocarina of Time” or “Breath of the Wild,” respectively. Through the years, “Zelda” has always been there, allowing players to experience adventures and make their own, always in a new way. With the series continually redefining what is possible from video games, it has become a legend in its own right. How fitting.