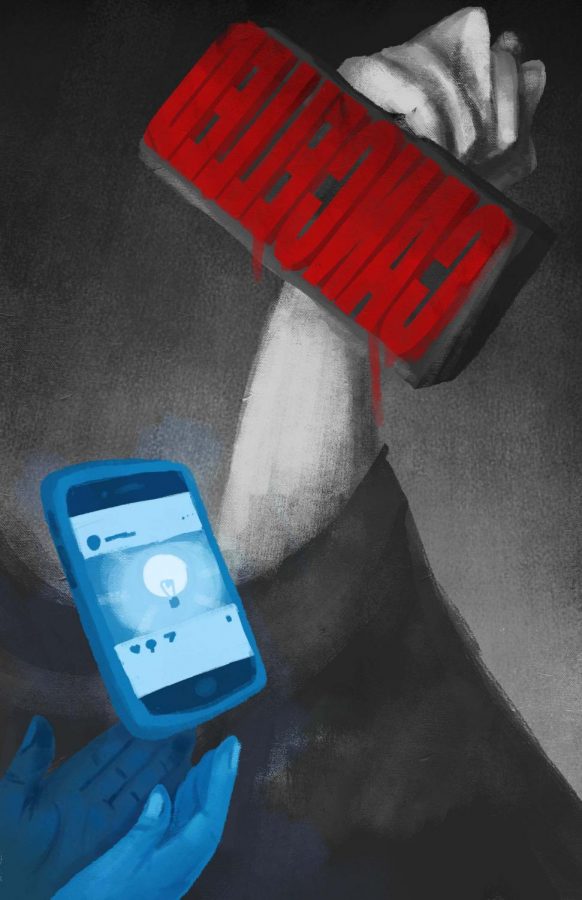 Although social media has introduced us to instant connection and a global community, it has also created a stage upon which everyone is a public figure and subject to a growing “cancel culture.” The term refers to “cancelling” public figures, or publicly denouncing them for their negative actions, which can range from racist tweets to personal attacks on other famous individuals. However, now that everyone is a public figure, we all become subject to attack. With the barrier of a screen present, it is easy to forget that each user is ultimately fallible and, thus, liable to make mistakes. Cancel culture is indicative of the larger issue of misunderstanding nuance in society today. This manifests in the liability of large groups of people to reduce important issues to black-and-white situations, which only leads to misunderstandings and unhelpful discourse.

Examples of cancel culture in action are easy to find: #TaylorSwiftIsCancelled for accusing Kanye West of using her name in his song “Famous” without her consent, and makeup artist James Charles was cancelled for his sexually inappropriate behavior by fellow content creator Tati Westbrook.

People have spoken out often and at length about how these are people being cancelled; however, at heart, it is an issue of our tendency to stand behind easy-to-consume statements rather than sort through the complex nature of any problem at hand. It is easier to declare that everyone must maintain a purity of opinion and action than to admit that people are fallible and to break down the reason we all fail to meet society’s standards.

We see the same issue show up in political discourse today, particularly in a heavily partisan U.S., leading up to this year’s presidential election. Big ticket issues boil down to shareable soundbites and basic phrases, which oversimplifies important problems. When we discuss politics today across the aisle or discuss differing opinions on social issues, it is necessary to understand that any argument, and any solution to any problem, will have flaws. It is impossible to come up with completely foolproof arguments, just as it is impossible to hold up purity as a standard for individuals, because these are impossible bars to meet.

This is not to say that because the political stances we support are fallible, we shouldn’t defend them. We must maintain holistic views of our beliefs and of social issues as a whole, and understand what flaws they hold and why they are still defensible. In the same way that people should be forgiven if they can learn from their mistakes and remain good people as a whole, good causes should not be thrown aside because of minor flaws in their structure.

Consider, for example, veganism. Often a divisive issue, people adopt verganism for a variety of reasons, ranging from boycotting animal cruelty to reducing individual carbon footprints by not consuming meat. However, many have also pointed out that vegan alternatives to non-vegan foods often result in exploitation of workers in countries that export food materials like quinoa. In addition, alternative milk products like almond milk often require much more water than traditional milk products. How do these issues even out? Is it morally permissible to be vegan?

The answer is that our society is far too complex to place strict moral judgment upon gray issues like this any longer. Trying to solve one problem in the world today as an individual often worsens other problems, so we must weigh the costs as individuals and make our decisions as such.

However, this is not to defend issues that are widely supported by opinion but not by fact. It is objectively true that veganism creates benefits in some areas, but causes detriment in others—but the issues cannot be easily weighed against one another in an objective fashion. Thus, it must come to individual judgment to decide. Alternatively, it is strongly supported by scientific evidence that vaccines are largely beneficial to individuals for reasons including herd immunity and the eradication of deadly diseases in modern life. In situations like this, hardline stances such as inoculation requirements by educational institutions are strongly supported by evidence, with little pointing to the contrary.

Although it seems like a simple lesson, it is still one that must be repeated: social issues that are morally gray are ultimately judged by the individual. By establishing moral absolutes here, we only generate misunderstandings and willful ignorance of the flaws inherent in any solution to major societal issues. What becomes important is the access to unbiased, accurate information and the ability of the individual to use critical thinking. What improves the situation is better education and the use of objective truth as support for subjective judgment. Without evidence and good judgment, we only further divide our communities through arbitrarily determined moral absolutes.

Caroline Zhu is a second-year computer science major with a deep and abiding love for Shakespeare. She is currently asleep and cannot take any messages.