Zhu: Why I feel awkward when you speak Chinese to me 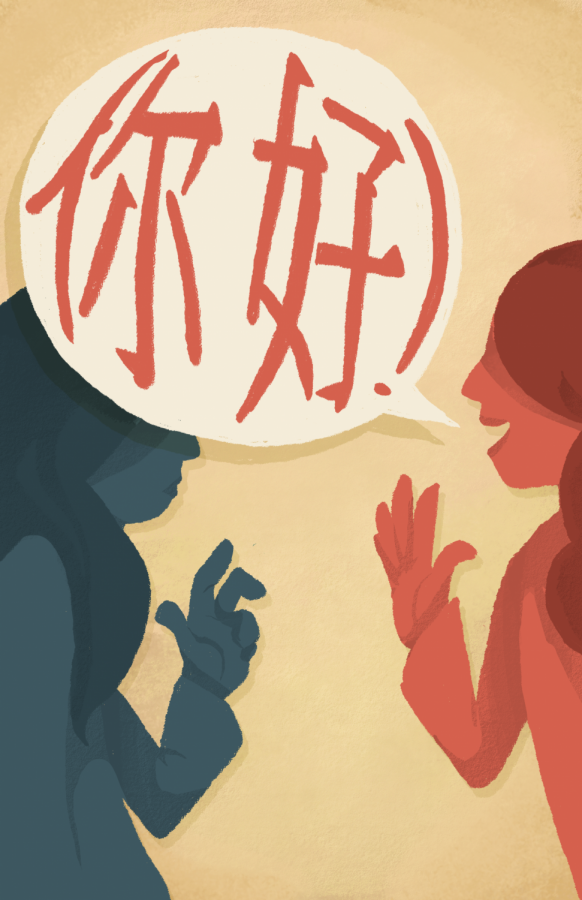 For years, I’ve admitted I’m uncomfortable when foreigners try to speak Chinese to me. Even though I don’t take offense at it, something about these interactions feels hollow and awkward. I know that I’m not the only one to feel it, but voicing these discomforts is often met with confusion and defensiveness. Is it that I don’t like to share culture? To say that is fundamentally untrue; I am the daughter of immigrants and of a Californian community built upon a variety of cultural backgrounds. However, in examining the scenario, there are real issues underlying these discomforts that go beyond the surface of what seems like a refusal to share culture.

To start with an oft-cited issue, I and many other Asians are often prone to what I call “greet-cycling,” or when someone tries to greet us using an Asian language greeting, only to use the wrong language. What makes it worse is the inevitable follow-up of a cycle through several other Asian language greetings, until you give in and force a smile to try and end the conversation. This issue stems from the need to be congratulated when one says hello in a foreign language and a false equivalency of different Asian cultures. However, in the moment, drawing attention to the issue makes you overly sensitive, and it becomes easier to ignore the issue or to play along at the expense of your dignity.

From saying hello to trying to hold a rudimentary conversation, these interactions are uncomfortable at best. Many people respond and try to defend themselves for doing just this; why do I feel uncomfortable when they are trying to speak to me in my language? What if they’re learning and trying to improve? To this I say, what of the reverse? Why must I cater to the needs of others without being asked? Why must I become the ambassador of a culture because someone has decided they want to project their image of China upon me?

Ultimately, it is a matter of assumption and communication. I don’t speak for the entire Asian community by any means, but these issues involving the assumption of cultural identities and the willingness of others to converse in a different language are still universal. Although I’d like to offer the blanket statement of the Golden Rule as a solution to the problem, therein lies another fundamental problem in the discussion: There are few cultural equivalencies between Asian and Western cultures. It’s not easy to ask people to treat others as they would expect to be treated when we refer to speaking a different language in a widely monolingual society.

When others defend themselves by saying, “I wouldn’t mind if it happened to me!,” my response is that they can’t speak to that. The false equivalency under discussion is between foreigners speaking English to an American in their own foreign nation and Americans trying to speak a different language to someone in America. English is the most studied foreign language in a variety of countries, from Europe to Asia. Speaking English in another nation isn’t a way to reach out to a marginalized community or misplaced exoticism, it’s a Tuesday.

To point out another major issue in this discussion, let’s talk about exoticism. Although the issue seemed largely confined to the fetishization of Asian women as the archetypally demure and submissive, with the increasing popularity of K-pop groups across the world, “yellow fever” affecting both men and women has now become a significant issue in talking about exoticism. Once again, many people hear this and become defensive. Can’t people just have types? However, looking at the fetishization of entire cultures, members of those cultures become desirable objects rather than individual people. It is fundamentally disrespectful, and to try and pull the defense that “we can’t know what’s in the minds of others” is weak—we know when we’re being treated as representatives of a culture rather than individual people.

Again, I can’t speak for the entire Asian community. I can say, though, that these are real issues that many people face. We must start valuing the opinions and emotions of marginalized communities in these culturally-rooted issues over the feelings of people who are not in these communities. This issue is too large and too complex to explore beyond the surface level in a single article, but a general rule to follow is to just ask before making any assumptions about what you should and should not say to others. When in doubt, not speaking until you know the outcome works for everyone and guarantees that you’ll always be fine.

Caroline Zhu is a second-year computer science and English major with a deep and abiding love for Shakespeare. She is currently asleep and cannot take any messages.