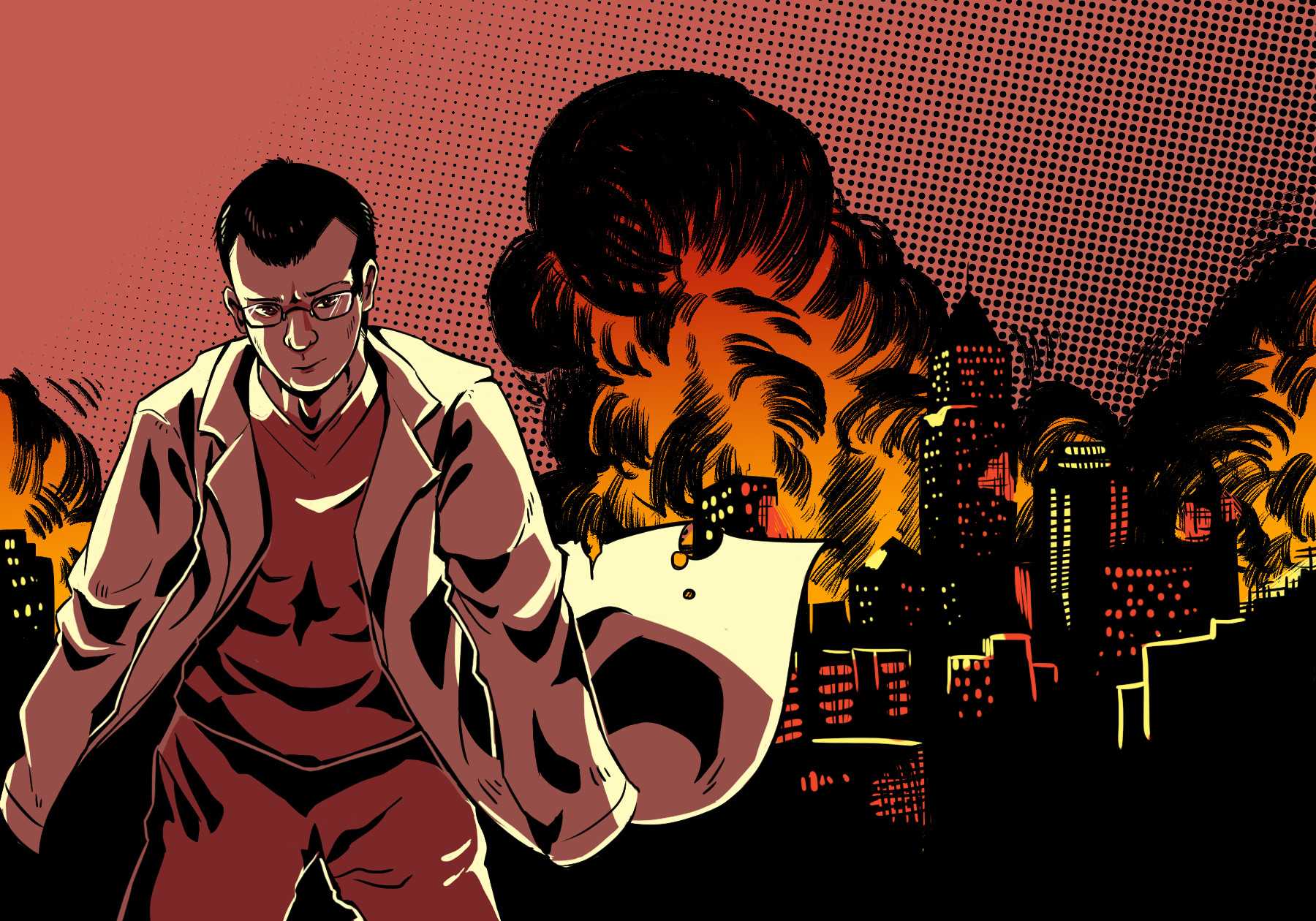 A day in the life of Doctor Doomsday

The doomsday doctor is average height, with short, buzzed hair and medium blue scrubs he can’t stop untying and retying. His wristwatch uses military time. He has a cold, and he keeps blowing his nose; his trash can is more than two-thirds full with tissues already, and he’s only been at his shift at University Hospitals for an hour. He’s blocking his intermittent coughing with a yellow doctor’s mask and occasionally takes swigs from the bottle of apple juice on his desk.

Doomsday, a.k.a. Jeffrey Luk, is the director of prehospital and disaster medicine at the UH Case Medical Center and an assistant professor in emergency medicine at the Case Western Reserve University School of Medicine. Luk’s nickname comes from his position as one of the people in charge of helping UH develop plans in cases of disasters, such as a surge of patients due to an accident, weather issue or a chemical hazmat release, or a power outage in the hospital.

Today, Luk is the attending doctor in charge of pod A, one of the four sections of the emergency room at UH. He doesn’t go more than five minutes without someone tapping on his shoulder or waving him over to talk to him. At one point, he assures a nervous patient that the anti-nausea drug she was just given is great: “I’ve had it myself.”

“He’s a shit magnet,” says Sheryl Hart, an advanced clinical nurse who also works in the emergency room. Hart has been a nurse for 25 years, and has worked with Luk since he started at UH.

“We still laugh at this,” says Hart. “One day he came in, and we hadn’t worked together in a while, and all of the sudden five or six critical patients showed up. And he treated all of them, and they were all okay, but I just said, Luk, ‘don’t work.’”

Luk’s whirlwind tour of the UH emergency room shows off 43 patient rooms—along with two trauma rooms used to treat patients after car crashes, stabbings, gunshots and other violent injuries. He shows me two sets of rooms that can open up in the case of a mass trauma, such as a pile-up or a mass shooting; one is set into pediatrics so that families can be treated together and another into the waiting room so that there can be more space if there is an influx of patients. He considers taking me into one of the trauma rooms, then turns around.

“Do you faint at blood or do you not know yet?”

Seeing my unsure expression, he moves on quickly.

“I still learn something nearly every day from him,” says Hart. “He’s almost too much to deal with sometimes. Sometimes we joke that you have to shoot him with a blow dart to get him to slow down.”

But Luk has found ways to escape from the hospital life. He describes himself as a foodie. Trying new restaurants, he says, is one of his favorite ways to relax. He doesn’t like cilantro or hot bubble tea. Travel is also one of his relaxation methods. He is about to leave on a three-week vacation to Sydney, Australia, where his mother’s family is from; while he’s there, he’s also going on a cruise to New Zealand.

Luk’s favorite show is “The West Wing,” and if it took place in a hospital rather than the White House, he could have been a character. He’s got creator Aaron Sorkin’s signature walk and talk style down; he’s the picture of business, with a phone virtually attached to his left shoulder, one hand typing (he’s an incredibly fast typer; he calls it “one of the best skills he ever learned”), the other frantically clicking between different patient charts.

Luk has been working at UH since August of 2011. He grew up in Passaic, New Jersey. (“No, I don’t know anyone from the “Jersey Shore,” they’re all from upstate New York,” he says, solidifying the fact that he truly hails from the Garden State.) He graduated from Amherst College with a degree in economics; although he was pre-med and took business classes, he says that his favorite part of college was electives.

“I knew I would be doing science for the rest of my life, so I wanted to know something different,” he said.

He got his masters in engineering management with a focus on crisis and risk management while finishing his fellowship at George Washington University.

“It works well with the disaster medicine,” he says. “It’s all in that niche.”

Luk ended up at UH because it had the job he wanted. “EMS is saturated on the coasts,” said Luk. “I wanted to teach residents. Most EMS people want to go into private practice. I’m one of the select people who wanted to do more.”

Luk is in charge of EMS teams for East Cleveland, Shaker Heights, Cleveland Heights and Case EMS. He jokes that his EMS teams cover people from “birth to death,” with the teams caring for all three of the major age groups in medicine. They handle ground care, critical transport and Air Medivac. Luk’s job as medical director means that he oversees the medical quality pre-hospital, as well as assisting with protocol development.

In addition to his work in the ER, with EMS and with disaster preparedness, Luk also does event medicine, staffing doctors at events in places like FirstEnergy Stadium and the Cleveland triathlon.

If a disaster struck one of these events, the hospital would follow the Emergency Operations Plan, a living document which Luk helps update with plans for specific incidents.

“There’s a lot of contingency planning involved and logistical support required,” said Jeffrey Rabinowitz, chief of Case EMS. “Dr. Luk will talk to you about a lot of behind the scenes stuff you don’t really think about.”

“We think about what’s most likely,” said Luk, who, along with other doctors, meets frequently to discuss what would happen in an emergency situation and what steps should be taken. “It’s hard to prepare mentally. The biggest variable is the patient. You need to prepare and protect yourself, but also care for the patients.”

“He’s very high energy,” says Edmundo Mandac, the soft-spoken interim chair of the emergency medicine department. “He’s very enthusiastic about the troubles that he gets himself into.”

“Everybody knows about him,” he adds. “He’s a legend.”

At one point, Hart asks Luk what he wants to order for dinner; he defers, saying he’ll get whatever Mandac wants when he comes in for work.

“He’s just going to say he’ll get whatever you want,” says Hart. She’s right; when Mandac gets in an hour later, he defers back to Luk. (They end up getting Dave’s Cosmic Subs.)

“I have a passion for disaster medicine, and because EMS is operational medicine, they go hand in hand,” said Luk. His fellowship work at Morristown Medical Center entailed both sectors, which are fairly related.

After six hours chasing Luk around with a notebook, I’m left with sore feet, an aching back and a plethora of inspirational quotes which Luk can’t seem to stop spilling.

“Do what you do because you want to, not because you have to,” Luk tells me. “That’s a good closing sentence.”